In 2001, Batten was seen in the comedy Bubble Boy with Brian George and John Carroll Lynch. Batten maintained a comedy trend with The Sweetest Thing with Loren Lester in 2002. Batten next filmed the straight-to-video American Crime in 2004 with Wade Andrew Williams. Drama segued into horror when Batten appeared in The Texas Chainsaw Massacre:The Beginning with Tim de Zarn and John Larroquette in 2006. In 2007, she was in the military biopic Charlie Wilson's War alongside Ron Fassler, Spencer Garrett, Pasha Lychnikoff, Brian Markinson and J. Patrick McCormack. Batten finished 2007 with the telefilm Suspect with Star Trek: Enterprise actor John Billingsley.

Batten has made guest appearances in episodes of all three shows in the CSI franchise. She appeared in the 2003 CSI: Crime Scene Investigation episode "A Night At The Movies" with Wallace Langham, the 2005 CSI: NY episode "Tanglewood" with Marco Sanchez, Irene Tsu as well as an uncredited Morgan Margolis, and the 2006 episode of CSI: Miami episode "Death Pool 100" with Mark Rolston and Michael Buchman Silver.

Batten is also an original member of the burlesque singing group the Pussycat Dolls. 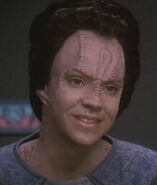 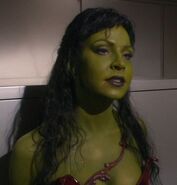 Navaar
ENT: "Bound"
Add an image to this gallery

Retrieved from "https://memory-alpha.fandom.com/wiki/Cyia_Batten?oldid=2528178"
Community content is available under CC-BY-NC unless otherwise noted.