Deflector shields
The D'Kora-class Marauder was a type of advanced starship utilized by the Ferengi Alliance during the 24th century. (TNG: "Force of Nature"; VOY: "Inside Man")

This class of vessel was referred to by the Federation as a "warship", and in the same instance, as an "attack vessel" by the Ferengi themselves. (TNG: "Peak Performance") This class was also later identified as a "trader", "transport ship", or "cargo ship". (TNG: "Force of Nature"; DS9: "The Forsaken")

During the early 2360s, Starfleet had no specific data on the design of the vessel, and at the time of first contact, possessed the general knowledge that Ferengi technology was estimated to be generally equal, but not identical, to Federation technology. Upon first view of this class vessel in 2364, Jean-Luc Picard described it as a "very impressive design." (TNG: "The Last Outpost")

Overall, the class was shorter in length than a Galaxy-class. (TNG: "The Last Outpost")

The standard complement aboard a marauder was "approximately 450", but could also be operated with as few as one or two. (TNG: "Force of Nature"; PRO: "First Con-tact")

The D'Kora-class was described by Geordi La Forge as being "almost as fast" as a Galaxy-class Federation starship. (TNG: "Ménage à Troi")

The D'Kora waz capable of performing sub-orbital flight, and with multiple ventral thrusters, was capable of stationary hovering several meters off the ground. (PRO: "First Con-tact")

The D'Kora-class Marauder was equipped with a variety of directed energy weapons, possessing placements for weapon ports at the "claws", positioned on the port and starboard sides, and a torpedo launcher located at the peak of the ship's primary hull. (TNG: "The Last Outpost", "Peak Performance", "Force of Nature") This class of vessel was also equipped with a forward missile launcher. (TNG: "The Price") 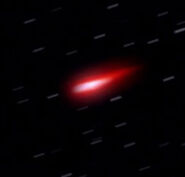 In addition, the D'Kora-class was equipped with a form of energy weapon emitted from the aft of the ship, detectable by a marked power surge prior to discharge. The resulting electromagnetic pulse was capable of weakening the deflector shield power of a Galaxy-class starship, as well as the capability of depleting the fusion generator and batteries by as much as thirty percent in a single discharge. (TNG: "The Last Outpost")

The script described the weapon as a "crackling pulse attack", explaining the effects of this unnamed weapon-type as "an electric-wave arc [that] ripples out and back from the trailing sides. It is something like a space-borne stingray." Aside from the script, the only other clues describing this weapon include a notation in the Star Trek Encyclopedia, which described it as a "powerful plasma energy burst," and the various Star Trek writer's guides, which state a similar description, describing "a very powerful energy/wave weapon."

In cases where a D'Kora's DaiMon was forced to surrender, the ship would extend its "neck", and open the ship's weapon ports to expose the ship's sensitive areas. This posture was also sometimes viewed as a preparation to attack. (TNG: "The Last Outpost")

The script described this process of the ship going into this posture as, "the snake head-like prow's pushing out from the ship body," and "the Ferengi ship now extends gun-like arms from either side of the prow." This posture was only shown in "The Last Outpost" during the Ferengi surrender.

At least one D'Kora-class vessel was equipped with an embedded auxiliary vessel. (TNG: "The Last Outpost")

The holding tank contained a holding cell, where prisoners were held, a table with stools, and a computer terminal. (TNG: "Ménage à Troi")

Described as a "holding tank" in the script, it was described as: "Typical of a Ferengi ship: an ill-designed, unattractive room. The furnishings are sparse. One end of the room opens into an area where a companel station is staffed by Nibor. A three-dimensional chess board is on the console. Separating this holding tank from Nibor is a lighted arch, suggesting a forcefield." [1]

The laboratory contained many pieces of lab equipment, a biobed, mind probes, and computer.

It also contained several atypical features, such as a bed that slide out of the wall, a food synthesizer, and a companel that allowed access for direct site-to-site transport. (TNG: "Ménage à Troi")

This lab was described in the script as "Another example of tasteful Ferengi interior decorating. Not a pleasant setting. Various pieces of strange and dangerous-looking equipment are everywhere. Compounds have spilled over and crusted on table surfaces. It's the kind of place you'd like to scrub down with Lysol." Later, it described the lab aspects of the room, describing a "the Ferengi operating table," "a strange device [..] probing the Betazoid's mind," and "a monitor shows the woman's brain, changes in color indicating the manipulations Farek is putting her through." [2]

The term "D'Kora-class" was first associated with this Ferengi starship class in "Force of Nature", and again in display graphics appearing in the two above referenced Voyager episodes. With exception to Nog's reference to Marauder-class attack cruisers in "Little Green Men", the only reference to this design being referred to as a "Marauder" (outside of the Star Trek Encyclopedia (4th ed., vol. 1, p. 266)) was in a display graphic appearing in "Inside Man" (shown right).