Deflector shields
The D'kyr-type was a type of Vulcan starship operated by the High Command during the mid-22nd century. Some of these vessels were given the designation of combat cruiser in the 2150s. (ENT: "Future Tense")

In 2154, a number of these starships were present at the Battle of Andoria, carrying out the ill-wishes of then – Administrator V'Las, which included not only attempting to invade Andoria – but almost going to war with Earth by trying to destroy Enterprise NX-01. (ENT: "Kir'Shara")

Later that year, several of these combat cruisers were incorporated into an Andorian-Earth-Tellarite-Vulcan fleet, consisting of 128 ships, combined to create a sensor grid formed to detect a Romulan marauder that threatened to destabilize the entire region. (ENT: "United")

In the mirror universe, Vulcan rebels utilized this class of vessel to engage the Terran fleet in 2155, and were among the rebel ships that attacked the ISS Avenger. (ENT: "In a Mirror, Darkly, Part II")

The outboard plan of the Vulcan combat cruiser's design consisted of a flattened, conical shaped hull that flared out and around the circular warp nacelles and coming back together at the aft section of the ship, where the impulse engines were placed. The design was significantly larger that Earth's NX class starship. (ENT: "Shockwave, Part II", etc.)

Ships of this class were armed with both photonic and particle weapons, as well as deflector shield technology. Particle beam emplacements include a forward emitter, two ventral emitters, and two aft emitters. (ENT: "Awakening", "Kir'Shara") 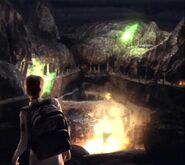 In combat, these vessels were superior in firepower to Starfleet's NX-class and nearly comparable in firepower to the Andorian battle cruiser. (ENT: "Kir'Shara") This class was inferior to a force of three Tholian ships, and in the vessels utilized in the mirror universe were significantly inferior to a single Federation Constitution-class starship. (ENT: "Future Tense", "In a Mirror, Darkly, Part II")

This class was capable of traveling a hundred light years in a few weeks. (ENT: "Future Tense") When the warp drive was not in use, the ship's annular-warp nacelle was dropped into the vertical position; when the engines were powered down, or preparing to launch its auxiliary craft, the nacelle was folded horizontally into the primary hull. (ENT: "Future Tense", "Bounty", "Impulse")

The D'kyr-type starship docked at the station in "Bounty" had its "warp ring" tucked in the lower position. In "Impulse", the Seleya appears to have its warp drive partially recessed as well, as does the damaged Tal'Kir in "Future Tense".

The bridge for the D'kyr-type included a panel where the commanding officer stood when speaking over the comm. (ENT: "Cease Fire")

The sickbay aboard this class was located on deck 5, and consisted of a relatively small room with a single central biobed inside a transparent tube. The bed had wrist and ankle restraints for unwilling patients, and diagnostic controls on the transparent material. On the opposite wall of the entrance was a large white Vulcan emblem. (ENT: "Impulse")

On the engineering deck was an auxiliary control room that could control the ships main functions if the main engine room and bridge were inoperable or unreachable. It had a round console in the center, which was directly below an access hatch to the access tunnel. The controls there could control the power distribution net and if need be, overload it to destroy the ship.

Around the walls of the room were monitors that showed engineering readouts and sensor telemetry, and on a flat wall opposite the door was a communications panel. At the bottom of that wall were two vents through which hexafluorine gas could be vented if the control room was taken over by hostile forces.

The bulkhead controls (usually routed to the control room via deck 9) could be rerouted through the auxiliary grid instead if need be. A series of command actuator circuits were in the central panel which controlled the door locking mechanisms. They could overload if not sequenced properly when being realigned, shocking anyone attempting to access the panel once power had been routed into it. (ENT: "Impulse")

As no on-screen or production name was ever assigned to this type of vessel, the name used here for this design was chosen based on Memory Alpha's identification of the first ship of this class to appear on screen, the D'kyr.

The menus of the Enterprise 4th season DVD set identify this vessel as a "Command Class."

The D'Kyr-type was designed by John Eaves and the studio model was built by Pierre Drolet. [2] It partially descended from Matt Jefferies "ring ship" design seen on the rec deck display in Star Trek: The Motion Picture. (ENT Season 3 Blu-ray, "Impulse" text commentary)

The majority of the Seyela interior was custom-built. Herman Zimmerman explained, "We designed [the Vulcan ship] from scratch for 'Impulse', a new vacu-form and that entire set – which was really a big H-shaped corridor with an airlock." (Star Trek: Communicator issue 151, p. 57)

The D'kyr-type starship was one of the few Star Trek: Enterprise ornaments produced by Hallmark. Released in the 2004 holiday season under the name "Vulcan Command Ship", it retailed for approximately US$28.00 and the engine ring glowed a bright blue when plugged into a normal string of Christmas lights.

In Star Trek Online, the D'kyr-type starship is a science vessel equipped with the Tal'kyr support shuttle. It can be purchased from the Cryptic Store.