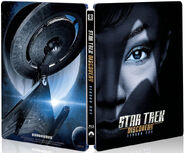 While in some cases still being marketed as region-restricted, the releases are in actuality region-free as this has increasingly become commonplace for the Blu-ray format. [2]

Remarkably, this release features the same number of special features as its DVD counterpart, constituting something of a break in release policies as the franchise had up to that point in time favored the Blu-ray format with the inclusion of more special features. Quite conceivably this had been an intentional franchise attempt to avoid the 2014 second "VAM controversy" that had followed the home media format releases of the first two alternate reality films.

Deleted and extended scenes
Discovering Discovery – The Concepts and Casting of Star Trek: Discovery
Featurette discussing the initial development of the first season and the casting process, with interviews with producers, writers and actors.
The Star Trek Theme
Alex Kurtzman and Jeff Russo discuss the creation of the score for the series, including developing the main title theme.
Creature Comforts
Exploring Alchemy Studios' make-up and prosthetics work on the series, looking at the updated designs for the Klingons, Vulcans and Andorians, as well as the development of the Kelpiens.
Designing Discovery
Spotlighting the work of Discovery's production design team, led by Tamara Deverell.
Creating Space
Looking at Pixomondo's visual effects for Discovery, and how its team turn initial designs into final sequences.
Prop Me Up
How Discovery's props are designed, iterated, and built.
Feeding Frenzy
How the work of the series' food stylist contributes to the atmosphere of the sets.
A Woman's Journey
Exploring the strong female presence in Discovery, both on- and off-screen, and the importance of the series' inclusionist message.
A scene from TOS: "Mirror, Mirror" is incorrectly labeled as having come from TOS: "Operation -- Annihilate!" in this feature
Dress for Success
Discovery costume designer Gersha Phillips and her team show how they create the extensive range of uniforms, armor, and clothing needed for the series.
Star Trek: Discovery – The Voyage of Season One
Featurette looking at the storyline and plot twists of the first season.

This particular release is one of the few individual Star Trek releases followed by the professional industry site The Numbers and for which domestic US home video format sales are known; The Numbers has reported that by August 2021 domestic sales had been realized of US$9.4 million for both this and its DVD counterpart releases. [3] The for a brand-new Star Trek production seemingly disappointing sales could be explained by the sharply divided fan reception the series had engendered. However, there were by this time also generic societal trend issues at play, which had nothing to do with Star Trek, additionally explaining the diminishing sales of physical home video formats. (see: main article)