Designed by Herman Zimmerman, Rick Sternbach and other members of the art department. The original, six-foot in diameter model, was built by Tony Meininger. It was in the very last scene in the very last episode of the series replaced by a CGI model.

The Danube-class, and later Yellowstone-class, runabout was designed by Joseph Hodges, Rick Sternbach, and Jim Martin. The miniature, which was approximately eighteen inches long, was built by Tony Meininger.

The Bajoran raider or Bajoran fighter as it is sometimes referred to, was the first spaceship design by Jim Martin after his promotion to senior illustrator on Star Trek: Deep Space Nine. As he recalls, "I did a Bajoran fighter that Kira and Dax crash. There were a few ships in that episode; there was a Bajoran transport and a small Bajoran fighter. I remember something really ridiculous about that ship. We intended to re-use these old windows that we had found for the set of the interior, so the windows I designed for the exterior needed to match. I kept trying to come up with a way to incorporate the window frames into the ship design. Then we ended up not using them, but they are still on the miniature!" (Star Trek: The Magazine Volume 1, Issue 13, p. 22) Martin, however, was partly in error in his recollections; a custom built cockpit set, that both matched his cockpit design and the cockpit windows on the model, was constructed for, and featured in the Deep Space Nine episode "The Siege", but he was right for the model's subsequent appearance. [4](X)

The design was converted into a physical studio model at Tony Meininger's model shop Brazil-Fabrication & Design, making its debut in "The Siege". The model subsequently appeared as a Maquis ship in the Star Trek: The Next Generation episode "Preemptive Strike" where its cockpit canopy was slightly modified during the production in order to have it match with the canopy of the slightly redressed Type 6 shuttlecraft interior cockpit set. [5](X)

As part of one of the last batches of existing studio models being translated into CGI models, a CGI version was built at Digital Muse for "Shadows and Symbols", where it appeared in the background. It was later used, unmodified, as an unknown alien ship in the Star Trek: Voyager episode "Drive". The CGI model was reconfigured to appear as various ships belonging to several species (Xantoras and Human, respectively) in ENT: "The Breach", "Twilight", and "Storm Front, Part II". [6](X)

Constructed out of styrene and resin, the physical model, measuring 18 × 15&frac; inches and known as Lot 486, part of the 40 Years of Star Trek: The Collection auction and estimated at US$3,000-$5,000, was eventually sold on 6 October 2006 with a winning bid of US$4,800 ($5,760 including buyer's premium). The model came with a small bag of additional parts, including a removable front landing gear pad. 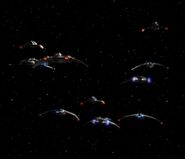 The Federation attack fighter was a Jim Martin design and as a small fighter design betrayed his Star Wars influences, giving "excess stomach acid" according to Doug Drexler. [7](X) The model was eventually built as a physical studio model at Tony Meininger's Brazil-Fabrication & Design model shop. Introduced as a Federation ship used by the Maquis in "The Maquis, Part II" and later in the penultimate Star Trek: The Next Generation episode "Preemptive Strike". (Star Trek: The Next Generation Companion (1st ed., p. 298)) It was not until "A Time to Stand" that the design was revealed to be specifically the Federation attack fighter design, implying that the ships used by the Maquis were commandeered vessels.

In preparation of the upcoming episode "Sacrifice of Angels" the model was converted into a CGI version. Bruce Branit of Digital Muse recalled, "There was also the Federation Fighter, which is a smaller one or two man ship that was mixed in with everything else. They've been established in a few other episodes. Toward the end of last season they started showing it in a couple of scenes. That one was built from scratch, as a first edition CG model, off of the real model." (Cinefantastique, Vol.30, No. 9/10, pp. 64-65) Premiering in that episode, the CGI model was later modified at Foundation Imaging to represent the Nightingale in VOY: "Nightingale" and as a Annari warship in VOY: "The Void".

The studio model was eventually listed in Christies' 2006 40 Years of Star Trek: The Collection auction. The catalog estimate for the lot was US$3,000 to $5,000; it ultimately sold for US$3,200 ($3,840 with premium). [8] The winners of the lot, a couple from Pennsylvania, were interviewed for The History Channel's Star Trek: Beyond the Final Frontier.

After John Eaves joined the art department of DS9, one of his first jobs was designing the Cardassian freighter that was able to conceal a large gun, tasked to him in August 1995. [9]

His first take on the design was a tip of the hat to Rick Sternbach's Galor-class. "I took the front end of a Galor-class Cardassian ship and tried to fan off from that. Using the front end, kind of sculpting it a little bit differently, and putting all these cargo bays in a row.", as he remembers. (Star Trek: The Magazine Volume 1, Issue 2, p. 22) The producers found the design too militaristic looking and asked for a more industrial, "freighterish" looking design. Elaborating further, "It was just a series of boxes, all stacked on top of each other in series of sixes, with a big engine detail on the back and the familiar looking Cardassian fork on the front. They wanted it very "freighterish" so I put the bridge on the back like it is on an oiler tanker of today. (...) That's where this design had come from: it's a bunch of huge, huge engines on the back which take it wherever you want to go. They wanted this more than the other one because it is very industrial looking."

It took Eaves another three months of refining before coming up with a design the producers signed off on in November. Though it was becoming less and less customary to produce full orthographic blueprints for model shops by that time (three-quarter views were deemed sufficient), in this case Eaves did, and sent them off to Tony Meininger's Brazil-Fabrication & Design in December, where the studio model was constructed, making its debut in "Return to Grace".

The model was used twice more as a Cardassian freighter, but was also redressed twice to represent freighters belonging to other species: the first time, repainted but otherwise unmodified as a Nekrit freighter in VOY: "Fair Trade" (it was in this color scheme that the model later made its last appearance as a Cardassian freighter). The second time the model was again repainted, but this time modified with the addition of warp engines and Klingon markings to represent Klingon cargo vessels in "Sons and Daughters", though Effects Supervisor for the episode David Stipes would have loved to have had a more Klingon design. He later rationalized the use of the Cardassian design, "We actually wound up using Cardassian freighters that were modified by Tony Meininger, which didn't seem all that implausible, considering all the fighting that had been going on between the Klingons and the Cardassians. We painted them Klingon colors, as if they were prizes of war". (Star Trek: Deep Space Nine Companion (p. 500)) This was the last appearance of the studio model. No production CGI model was ever constructed of this design.

The original mesh of the CGI model would be reworked for a later appearance in Star Trek: Enterprise.

The Breen ship was designed by John Eaves and rendered as a CGI model.

Eaves commented: "Designing the Breen ship has an interesting origin. The Breen are a race that have no established architecture, therefore it opened the door to me to be extremely creative. My initial pass had the ship loosely around the letter 'T'. The story behind the 'T' is that it is the first letter of my fiance's name, Tara. I submitted the drawings and the producers liked the shape and requested more detailed drawings. When these were presented, the producers requested the drawings go a different direction than the original 'T' shape. Therefore, I started designing 'T' ships with a more stylish letter formation – lower case 't's', 't's' hidden among other shapes, etc. Each design sparked enthusiasm with the producers, yet they still wanted to see more fantastic ideas. So, after several more passes, they chose a drawing I didn't think they would choose. It broke all the traditional rules that Star Trek ships are required to meet. The 'T' ship, as I call it, is an open-faced, multiple plane swept wing conglomeration of weapons and engines and a big fat 'T' right in the centre. If you know where to look, all of the letters of Tara's name can be found in the detailed panelling of the ship's exterior. This has been my favorite of all designs for DS9 because of the inspiration which went into its design". ("Far Beyond the Drawing Board", Star Trek Monthly issue 54)

An example of John Eaves' concept art for the ship

A second example of John Eaves' concept art for the ship

The CGI model was constructed and rendered by Doug Drexler, who had just mastered the LightWave 3D CGI software on his own accord, and the build of the Breen ship was in effect his very first contribution in this format for the franchise. (Star Trek: The Magazine Volume 1, Issue 7, p. 50) Eaves wrote: "Doug Drexler made a massive skills jump from graphics to CG model maker with this ship, and what fun it was to watch him learn something new. And now he’s a master of CG modeling and animation with unlimited talent!" [11] As was usual with Eaves' designs, enough room was left in his designs for the digital modellers to apply their own ideas to the final model build according to their design interpretation. Drexler's build was therein no exception as he worked in some design changes and additions on the detail level, as well as choosing the overall colorscheme for the ship, which was met by Eaves' approval. The model was then turned over to effects house Digital Muse for compositing it into the effects scenes of its debut episode "Penumbra". (Star Trek: Designing Starships Deep Space Nine and Beyond, pp. 84-85)

The mesh for the model would later be modified by Brandon MacDougall at Foundation Imaging to represent the Quarren coyote ships in Star Trek: Voyager seventh season episodes, "Workforce" and "Workforce, Part II", which incidentally, earned him and his team a visual effects Emmy Award nomination. (Star Trek: Voyager Companion, p. 478)

A Cardassian version of a workbee appeared in "Tacking Into the Wind". Its existence and actual appearance was only firmly confirmed on Doug Drexler's blog(X), being "little more than "atmosphere" around the yard, and never meant to be seen up close". This last new Digital Muse CGI build for the series was later modified at Foundation Imaging, (Star Trek: Voyager Companion (p. 467)) and seen in better detail as an Imhotep ship in "Drive".