Dan Carton is an actor who appeared in several episodes of Star Trek: Deep Space Nine and Star Trek: Voyager. He received no credit for his appearances. Carton also appeared as a Cardassian on the promo photo for Star Trek: The Experience for which he was photographed on 6 October 1995.

For the episode "Defiant", Carton filmed his scenes between Monday 3 October 1994 and Wednesday 5 October 1994 on Paramount Stage 4.

Also in 1994, Carton briefly appeared as Alfalfa's dad in the remake of The Little Rascals, a comedy which also featured Whoopi Goldberg and Kenny Yee. 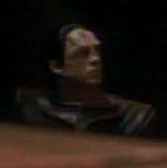 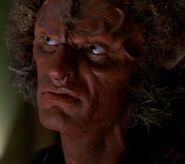 Loran
VOY: "Maneuvers"
(uncredited)
Add an image to this gallery

Retrieved from "https://memory-alpha.fandom.com/wiki/Dan_Carton?oldid=2414624"
Community content is available under CC-BY-NC unless otherwise noted.