Dana Lynn Hee (born 9 November 1961; age 59) is a stuntwoman and stunt actress who was the stunt double for Jeri Ryan in several sixth and seventh season episodes of Star Trek: Voyager and performed stunts in Star Trek: Deep Space Nine. She received no credit for her work. Both costumes from the episode "Tsunkatse" were sold off on the It's A Wrap! sale and auction on eBay. [1] [2]

Hee was born as Dana Lynn Davidson in Baton Rouge, Louisiana and has been a martial arts expert, a model, and a stuntwoman and stunt actress. In 1988 she won the gold medal for the United States at the Olympics in Seoul, South Korea in Taekwondo. She has been a motivational speaker, television color commentator and writer and also a two time winner of a World Taurus Stunt Award (2000 best aerial sequence for Charlie's Angels and 2001 best fight choreography for Alias), and one time World Taurus Stunt Award nominee (2004 for best action sequence with a vehicle for Terminator III, where she doubled Kristanna Loken).

She has doubled for stars such as Gwyneth Paltrow, Natasha Henstridge, Jamie Lee Curtis, Sandra Bullock, Jennifer Garner, Cameron Diaz, Uma Thurman, and is a close friend and stunt double of Nicole Kidman.

Hee also performed stunts in television series such as Baywatch, Dharma & Greg, The X-Files, Charmed, CSI: Miami, Alias, Days of Our Lives, and in several episodes of Mortal Kombat: Conquest (1998-1999, with Kristanna Loken). 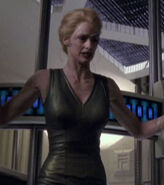 Stunt double for Jeri Ryan
VOY: "Body and Soul"
(uncredited)
Add an image to this gallery

Retrieved from "https://memory-alpha.fandom.com/wiki/Dana_Hee?oldid=2715662"
Community content is available under CC-BY-NC unless otherwise noted.