In 1995, Riordan starred as Captain Zoom in the TV movie The Adventures of Captain Zoom in Outer Space (in which Ron Perlman and Nichelle Nichols also appeared). A co-writer and supervising producer of that production was David A. Goodman, who later described Riordan as a "very good actor." (ENT: "Judgment" audio commentary podcast) 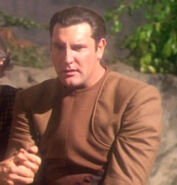 Duras, son of Toral
ENT: "Judgment", "The Expanse"
Add an image to this gallery

Retrieved from "https://memory-alpha.fandom.com/wiki/Daniel_Riordan?oldid=2491998"
Community content is available under CC-BY-NC unless otherwise noted.