Deflector shields
"You know, the rate we go through runabouts, it's a good thing the Earth has so many rivers."
– Major Kira, 2371 ("Family Business")

The Danube-class, also known as Runabout-class, was a type of Federation runabout in operation during the latter half of the 24th century.

All runabouts assigned to Deep Space 9 were named after rivers on Earth. (DS9: "Family Business")

The Danube-class was first commissioned by Starfleet in 2368 as a small, short-range interstellar craft. (DS9: "Paradise")

The following year, the space station Deep Space 9 took on three runabouts for use in their daily operations: the USS Ganges, the USS Yangtzee Kiang, and the USS Rio Grande. They were transported to the station aboard the USS Enterprise and were housed within the landing bays situated around the habitat ring. (DS9: "Emissary")

In the first two years of the space station's use by Starfleet, the runabout remained the primary method of transport and defense support, as they were instrumental in discovering many new worlds and civilizations within the Gamma Quadrant, as well as the Bajoran wormhole itself. (DS9: "Emissary", "Battle Lines", "Vortex", "The Alternate", "Shadowplay", "The Jem'Hadar")

In mid-2370, DS9 sent its runabouts into the Gamma Quadrant to make contact with the fleet of Skrreean refugee ships that were on the other side of the wormhole. (DS9: "Sanctuary")

In 2371 of an alternate timeline, the Yellowstone-class, which offered an alternate form of drive than the Danube-class, was introduced. (VOY: "Non Sequitur")

Even after DS9 took delivery of the USS Defiant in 2371, the runabouts were still widely used, and for a time, the station was equipped with at least four of these runabouts. (DS9: "Visionary")

Just before the beginning of the Dominion War, Elim Garak and Worf used a runabout to stealthily rescue crew members at Internment Camp 371. (DS9: "In Purgatory's Shadow") They were also used to help defend DS9 against a Dominion fleet. (DS9: "By Inferno's Light") The later were used in exercises with the Ninth Fleet in 2374. (DS9: "Change of Heart")

Danube-class runabouts were about a quarter the size of an Erewon-class personnel transport. (DS9: "Paradise") Their overall width was 14 meters. (DS9: "Playing God") Runabouts were designed to have a maximum speed of warp 5. (DS9: "Dax")

According to the script for "Emissary", as the Rio Grande tows the Prakesh from the wormhole, it was revealed "to see an incredible sight… the tiny Runabout towing out the huge Cardassian warship, at the end of a tractor beam, fifty times larger than the Starfleet vessel…"

According to Jadzia Dax, runabouts "practically fly themselves", in fact, they were capable of operating with automatic helm control, yet were easy for anyone to pilot, especially someone who had third level flight experience. (TNG: "Timescape"; DS9: "Playing God") When asked by his father, Commander Sisko, if he could do any science project he wanted to in late 2370, Jake Sisko immediately chose, "pilot a runabout", but was shot down as that was "not exactly a science project." (DS9: "The Jem'Hadar")

Although typically customary for both seats to be enabled so that a second individual could pilot the craft in the event of an emergency, Commander Sisko intentionally did not illuminate the ship's controls at the other pilot's station where Gul Dukat was seated during a joint mission to the Volan colonies in the Demilitarized Zone in 2370. Dukat assured Sisko that he would not "steal [his] little technical secrets." It was later revealed that despite Starfleet's best efforts, the Cardassian Central Command already possessed knowledge on the operations of this class vessel, as Dukat later stated that he "knew all about these controls before I ever came on board" and pointed out to Sisko the correct location of the photon launcher control. (DS9: "The Maquis, Part I")

The Danube-class runabouts were also equipped with an aft tractor beam emitter. This emitter could be used to tow starships at least as large as a Galor-class. Jean-Luc Picard once commented, in 2369, that he suspected "that the sight of [a Cardassian] warship being towed back [from the Gamma Quadrant] by a Starfleet runabout took the heart out of their fight." (DS9: "Emissary") They were also capable of being rigged to tow at warp velocities. (DS9: "Paradise") However, they did not possess the strength necessary to haul a Jem'Hadar fighter buried under ninety meters of rock and into orbit. (DS9: "The Ship")

A runabout did not possess the ability to generate a subspace isolation field of the magnitude required to lock on and surround the warp core of a Galaxy-class in order to beam it into space. (TNG: "Timescape")

The hull of a Danube-class ship was made up of metallic composites that could interact with magnetic fields. Lost ships could be found by using a differential magnetometer to detect fluctuations in the hysteresis curve. (DS9: "Battle Lines") In the case of low power, each runabout had a contingency fuel cell to provide an emergency supply of power. The vessels also had the ability to eject their antimatter pods if so needed. (DS9: "Battle Lines")

A runabout could be modified so as to prevent sensors from picking up its power signature by modulating the engine's power emissions, reconfiguring the deflector shield grid, and installing field buffers around the subspace emitter coil. If done properly, it could be made to appear as a Lissepian transport. However, if not done correctly, the field buffers would distort the runabout's power signature, causing it to appear to outside scans as to be operating with malfunctioning subspace field emitters, a malfunction that could be passed off as problematic phase modulators. (DS9: "The Homecoming")

For defense, the runabouts were armed with phasers and photon torpedoes. The torpedo launcher assembly was accessible via a hatch on the floor of the forward cabin. (DS9: "Past Prologue") In late 2370, Chief Miles O'Brien of Deep Space 9 began retrofitting the weapon systems of the runabouts USS Mekong and USS Orinoco with extra banks of photon torpedoes in preparation to the Federation's first engagement with the Dominion. (DS9: "The Jem'Hadar") He also made some modifications to the phaser arrays and shield generators of the station's runabouts. (DS9: "Hippocratic Oath")

As DS9's original lifeline to the rest of the Alpha Quadrant, the runabouts often dealt with many skirmishes on the frontier. They were utilized in fighting off Maquis raiders. (DS9: "The Maquis, Part II") Sisko believed that a runabout could handle a Bajoran patrol. (DS9: "The Siege")

They were not, however, a match against a T'Lani cruiser. (DS9: "Armageddon Game") Nor could they outrun a Theta-class, a Klaestron starship, or a Jem'Hadar attack ship. (DS9: "Dax", "Vortex", "Treachery, Faith and the Great River") According to Gul Dukat, Cardassian pursuit vessels were "years ahead" of the runabout design. (DS9: "The Maquis, Part I") Although surviving their initial engagement alongside the USS Odyssey in a confrontation with three Jem'Hadar fighters, alone they were no match for a wing of said fighters. (DS9: "The Die is Cast", "Valiant") Nevertheless, with proper instruction, a runabout had the ability to destroy a Jem'Hadar fighter if allowed to get past the enemy ship's defenses. (DS9: "Treachery, Faith and the Great River")

A runabout was small enough to be able to get close enough to another ship in order to overload the other ship's shield generators with directed phaser fire. (DS9: "The Passenger")

Ideally, a runabout was piloted by two crewmembers, although one pilot would suffice. (DS9: "The Maquis, Part I") The pilots' consoles faced forward upon two large portholes. The cockpit had stations for up to four crewmembers. The two large portholes were equipped with retractable blast shutters. (DS9: "One Little Ship") Small square viewscreens mounted within the forward corners of the cabin were used for video communication and ship status displays. (DS9: "Vortex")

In the original configuration, a food replicator and a compact personnel transporter were located immediately behind the cockpit stations. After the class underwent a refit as hostilities arose between the Federation and the Dominion, the transporter and replicator were moved further back and a secondary tactical console was positioned in the cockpit. The transporter was capable of transporting multiple persons simultaneously. (DS9: "Vortex")

The rear of the craft could be configured as a passenger cabins complete with sleeping and dining areas for extended travel. (TNG: "Timescape"; DS9: "The Jem'Hadar", "Let He Who Is Without Sin...", "By Inferno's Light") This area could also be used as a cargo bay. (DS9: "Tribunal")

In the center of the craft, between the two wing pylons, a series of replaceable modules could be connected. These modules could be swapped to suit mission requirements. Examples of available modules included science laboratories, crew quarters, and photon or quantum torpedo bays. (DS9: "Melora") The craft was also equipped with an emergency unit for medical emergencies. (DS9: "The Passenger")

Also carried aboard runabouts were medkits, covariant oscillators, communications probes, portable generators, and a stasis chamber. (DS9: "Paradise", "Heart of Stone", "Nor the Battle to the Strong", "Change of Heart")

The runabout was equipped with at least one manual emergency hatch, located amidship on the port side of the vehicle. (DS9: "Battle Lines") A small Jefferies tube was also present, immediately underneath the warp core that ran along the spine of the vessel. (DS9: "Blaze of Glory")

A forward view of a typical runabout cockpit ca. 2369 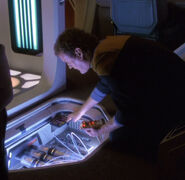 Although originally called "Runabout-class" by Benjamin Sisko in "Emissary," the official class designation was "Danube-class." The official name was originally mentioned in the Star Trek Encyclopedia (1st ed., p. 285), but was later seen in episodes as part of display graphics and reiterated in the Star Trek: Deep Space Nine Technical Manual (p. 140). The term "Danube-class" was first used in dialogue in "Hippocratic Oath".

Interestingly enough, the aft cabin sections were never seen in any of the Deep Space Nine episodes in which they were a staple, yet the aft cabin was featured prominently in "Timescape", the only TNG episode in which the runabout appeared.

Early in Star Trek: Deep Space Nine, the writers planned to occasionally drop in runabouts named for rivers on other worlds, but producer Michael Piller noted that the need to include the explanation in dialogue would probably detract from an episode's storytelling. As a result, all runabouts on screen ended up named for Earth rivers. (Star Trek Sticker Book, pg. 13)

According to Sternbach, the studio model of the Sydney-class, first seen in "Relics", was to have become the basis for DS9's runabouts, before a new design was ordered. [1]

The CG model proved a boon when "Change of Heart" featured the runabout Shenandoah flying through an asteroid belt and landing in the Soukara jungle. Commented Adam Buckner: "That was another one of those shots that would have been almost impossible to do with motion control. Where do you mount the ship? Because you see it coming, its bottom, one side, and its nose. It turns around, you see its back, the other side, and its top. Where do you mount it if it's a motion control model? David [Stipes] was able to do it because it was a computer generated model." (Cinefantastique, 146, Vol 30 #9/10, 1998)

The Technical Manual also states that the USS Danube (NX-72003) was the prototype of this class, constructed at Utopia Planitia Fleet Yards in 2365. (p. 140)

The Danube-class runabout is in the game Star Trek Online, and can be customized with or without the rollbar. It features as both a playable ship of the shuttle/fighter tier or as a hangar 'pet' launchable from other craft with hangar bays, such as Akira-class vessels.