Kirk confronts his most dangerous enemy: himself.

Dark Victory is a Pocket TOS novel – the second novel in the retroactively-designated Mirror Universe trilogy – written by William Shatner, with Judith and Garfield Reeves-Stevens. Published by Pocket Books, it was first released in hardback in April 1999.

From the book jacket
The Mirror Universe is a dark and twisted reflection of our own, where all that is noble and compassionate is instead cruel and barbaric. Now our universe has been invaded by that other reality's most feared tyrant: the dreaded Emperor Tiberius, the Mirror Universe counterpart of James T. Kirk. Just as Kirk survived his own era to live into the 24th century, so has Tiberius returned from the past to menace a new generation of Starfleet heroes.

And only Kirk can stop him.

With Spock, McCoy, and Scotty at his side, and teamed with Jean-Luc Picard and the valiant crew of the USS Enterprise NCC-1701-E, Kirk is propelled into his most personal and dangerous mission yet as he fights to uncover the secret of Tiberius' return and learn the terrible truth behind the madman's nightmarish plans for the Federation.

But how can he defeat an enemy who knows Kirk's mind as well as he knows his own? 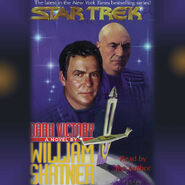 It is noted that the "commodore" rank has fallen into disuse in the 24th century, although a handful of officers still have this grade.

It is unclear whether any variation of this design was in "standard", non-classified service.

Mirror universe
Pauli
Shuttlecraft on USS Venture.
USS Pauli
Secret science vessel of Project Sign.
Project Sign
A top-secret Starfleet endeavor dealing with a perceived threat of the fabric of galactic civilization being manipulated by the Preservers, based on psycho-historical research. Starfleet assigned sophisticated holographic crewmembers, some possibly sentient or disguised living beings, to three vessels so secret that they were not even officially registered: USS Pauli, USS Schrödinger, and USS Heisenberg.
USS Schrödinger
Secret science vessel of Project Sign, commanded by Captain Mantell.
USS Sovereign
USS Tobias
Recently destroyed Oberth-class science ship.
USS Venture
Federation starship, with a shuttlecraft named Pauli.
USS Voyager (mirror)
Duplicate of USS Voyager built in the mirror universe. This ship was built by the Klingon-Cardassian Alliance to be an exact duplicate of Voyager as part of a ruse to fool Jean-Luc Picard.

Retrieved from "https://memory-alpha.fandom.com/wiki/Dark_Victory?oldid=2499089"
Community content is available under CC-BY-NC unless otherwise noted.