Personnel assigned to the Darwin Genetic Research Station in 2365.

Seven genetically enhanced children lived on the Darwin Genetic Research Station on Gagarin IV in 2365. One of them, David, was beamed aboard the shuttle Sakharov by the USS Enterprise-D for further medical investigations. The other six, all under twelve years old, remained on the station.

When Doctor Katherine Pulaski was infected by David, her shuttle landed at the station and she witnessed the special abilities of the children, including telekinesis and telepathy. (TNG: "Unnatural Selection")

The three female and three male "children" were played by unknown performers who received no credit for their appearance.

Five scientists were members of a Federation science team at the Darwin Genetic Research Station. They were involved in a research project that developed aggressive immune systems capable of destroying disease organisms.

However the antibodies were capable of attacking Humans and hyperaccelerating the aging process. They were infected, but cured by a transporter-based technique that was successful in curing them. (TNG: "Unnatural Selection")

All six scientists were played by background performers who received no credit for their appearance. Among them were Robert Bray, Ronnie Merritt, Larry Guthrie, Lydia Nielsen, and two unknown actresses. All five costumes were sold off on the It's A Wrap! sale and auction on eBay. [1] [2] [3] [4] [5] 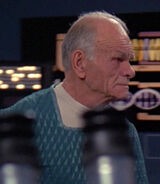 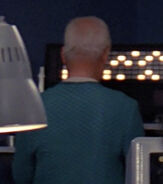 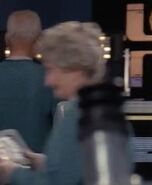 A female Darwin scientist
Add an image to this gallery
Retrieved from "https://memory-alpha.fandom.com/wiki/Darwin_Genetic_Research_Station_personnel?oldid=2520688"
Community content is available under CC-BY-NC unless otherwise noted.