A dataport was a device that allowed a person to interface directly with a computer. Dataports also allowed information to be transferred to or from a person's mind, including memories, which could then be stored in data crystals. A third capability of dataports was allowing two people to link minds; in that capacity, they were used by net-girls, among others, who allowed paid customers into their minds.

The typical dataport had three parts: one which was implanted behind the person's ear, one which was attached to the implant, and one which attached to the target computer. Although they were not illegal, they were frequently used by criminals to illegally bypass security programs. The drawback to using dataports was that certain security measures sent energy surges back through the connection, damaging the user's nervous system. This was known as being "spiked". (DS9: "A Simple Investigation", "Honor Among Thieves")

When the Borg re-captured Seven of Nine in 2375, she was implanted with a dataport. (VOY: "Dark Frontier") 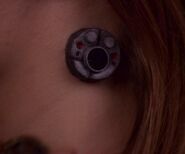 The implant portion of a dataport 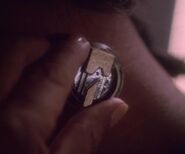 The portion that attached to the implant 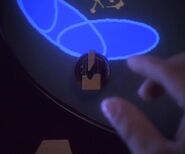 The portion that attached to the target computer
Add an image to this gallery
Retrieved from "https://memory-alpha.fandom.com/wiki/Dataport?oldid=2030350"
Community content is available under CC-BY-NC unless otherwise noted.