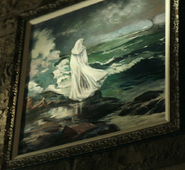 The other painting in the set

Daughter was one of a set of two oil on canvas paintings painted by Data circa 2369. It depicted a young woman standing at the edge of a rocky shore on a stormy day. The difference between the two was the direction the woman was looking. In Daughter, she was looking directly at the viewer; while in the other, she was looking to the horizon. Data gave them as a gift to Captain Jean-Luc Picard while they were aboard the USS Enterprise-D.

Thirty years later, Daughter, item number 227.67, had been stored since 2386 in Picard's section of the quantum archive at the Starfleet Archive Museum while the other painting was framed and hung on the wall in the study of Château Picard. The presence of Dahj Asha's face in this painting led Picard to speculate that Bruce Maddox used it as inspiration when creating Dahj and her twin, Soji Asha, via fractal neuronic cloning. (PIC: "Remembrance")

Retrieved from "https://memory-alpha.fandom.com/wiki/Daughter_(painting)?oldid=2455854"
Community content is available under CC-BY-NC unless otherwise noted.