David Christian is an actor who appeared in one episode each of Star Trek: Voyager and Star Trek: Enterprise.

For the VOY third season episode "Warlord", Christian filmed his scenes on Tuesday 3 September 1996 on Paramount Stage 9 and is listed as "Transporter N.D." on the call sheet. For the ENT first season episode "Cold Front", he filmed his scenes on Friday 5 October 2001, Wednesday 10 October 2001 and Friday 12 October 2001 on Paramount Stage 8 and 18. His costume from this episode was later sold off on the It's A Wrap! sale and auction on eBay. [1] 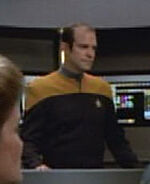 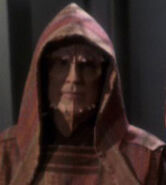