David Cowgill (born 8 December 1960; age 60) is an actor who made two brief Star Trek appearances in 1996, in an episode of Star Trek: Voyager and in Star Trek: First Contact.

He was born in McAllen, Texas. Primarily a voice artist, Cowgill's vocal talents can be heard in such animated films as Nausicaä of the Valley of the Winds (2004) and Chicken Little (2005), both also featuring the voice of Patrick Stewart. Cowgill can also be heard in 1998's Mulan (as can George Takei) as well as 2001's Shrek, 2004's Howl's Moving Castle (with Jean Simmons) and 2005's Madagascar. His live-action film credits include Tom and Huck (1995, with Charles Rocket) and Kiss the Girls (1997, starring Ashley Judd) as well as The Time Traveler's Wife opposite Eric Bana.

Cowgill has also appeared on such live action television series as Werewolf (with Ethan Phillips), Highway to Heaven (with Shelby Leverington), Mr. and Mrs. Smith (starring Scott Bakula), JAG (with Steven Culp and Leon Russom), Martial Law (with John Billingsley), and The Pretender (with Cliff DeYoung, Susan Gibney, and Harve Presnell). He also played the role of Cliff Wilson on the soap opera The Young and the Restless from 1993 through 1996. 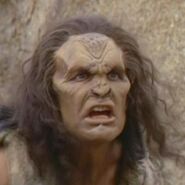 Retrieved from "https://memory-alpha.fandom.com/wiki/David_Cowgill?oldid=2699372"
Community content is available under CC-BY-NC unless otherwise noted.