David Keith Anderson is an actor and professional dancer who was involved in Star Trek feature films and spin-off television series for fourteen years. Beside his recurring roles and several one time appearances in different roles, he also served as stand-in and photo double for the main actors LeVar Burton, Tim Russ (when Lemuel Perry was unavailable), and Anthony Montgomery. For almost all of his appearances he received no on-screen credits.

Anderson is an AFTRA and SAG member and received a Best Supporting Actor Award in 1991. He attended the Dekalb community college and graduated as an associate in business in 1990.

Among his many performances on-screen are roles in television series such as Murphy Brown (1988, episode Murphy's Pony), General Hospital (1996), and Kenan and Kel (2000, episode The April Fools), as well as appearances in Days of Our Lives, In Living Color, Love and War, That's Life, Resurrection Blvd., Monk, and Dexter (2006, also as stand-in for Erik King, alongside Pablo Soriano and Susie Stillwell).

Anderson also acted in feature films, including For Us the Living: The Medgar Evers Story (1983, with Paul Winfield and Thalmus Rasulala), the comedy Good Burger (1997, as a stunt performer alongside LaFaye Baker, Eugene Collier, Rusty McClennon, Johnny Martin, and Denney Pierce), the fantasy horror Voodoo Moon (2005, with Jeffrey Combs and Frank Collison), the crime drama Fracture (2007, with Billy Burke, Bob Gunton, and Tom Virtue), and the short comedy Driving Under the Influence (2007, with Patrick Kerr).

Mainly a professional dancer in various styles, he appeared also on-screen in films such as I'm Gonna Git You Sucka (1988, with Bernie Casey, Clarence Williams III, Cullen Chambers, Wren T. Brown, and Tom Wright), The Adventures of Ford Fairlane (1990), The Nutty Professor (1996, with Julianne Christie and Athena Massey), and The Sweetest Thing (2002, with Cyia Batten). He is also teaching dance performances and coordinated many like in Passions, Days of Our Lives, and Monk, as well as for the dancing group "Les Masquerade". He is currently living in North Hollywood, California. 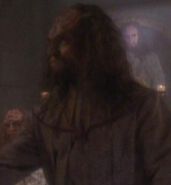 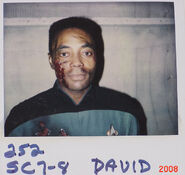 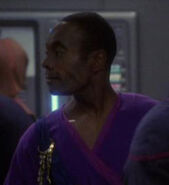 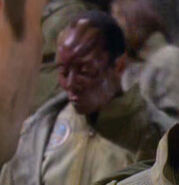 Retrieved from "https://memory-alpha.fandom.com/wiki/David_Keith_Anderson?oldid=1654186"
Community content is available under CC-BY-NC unless otherwise noted.