May was a regular on the long-running CBS soap opera Guiding Light from 1979 through 1980 and then again from 1982 through 1983. She also had recurring roles on the medical dramas St. Elsewhere, ER, and Gideon's Crossing, HBO's The Larry Sanders Show, the legal dramas L.A. Law and Murder One, and the soap opera Days of Our Lives.

Following her time on Guiding Light, May co-starred with Bill Cobbs, George Coe, Kevin Conway, and John Glover in NBC's 1983 two-part made-for-TV movie Rage of Angels. The following year, she made her feature film debut with a brief role in the romantic comedy The Woman in Red, which also featured Viola Kates Stimpson.

May's other television credits during the 1980s include guest spots on Falcon Crest (starring Robert Foxworth), Hotel (with Cliff Potts), Remington Steele (with Daniel Davis and Dakin Matthews), The Twilight Zone (in a segment directed by Paul Lynch and co-starring Earl Billings and William Schallert), and Murphy Brown (with Harley Venton). She also appeared in the 1988 telefilm In the Line of Duty: The F.B.I. Murders, starring Ronny Cox, Bruce Greenwood, and David Soul.

In 1990, May starred in the biographical TV movie Call Me Anna, along with Timothy Carhart and Richard Fancy. The following year, she appeared on an episode of Wings, the hit NBC comedy series which starred fellow DS9 guest actor Steven Weber. In 1992, May appeared in a Jake and the Fatman episode with Dey Young and in the TV movie Sexual Advances with Terry O'Quinn.

Between 1992 and 1998, May portrayed Melanie Parrish in ten episodes of HBO's acclaimed comedy series, The Larry Sanders Show. During this time, she worked with such performers as Jason Alexander, Megan Gallagher, Penny Johnson, Wallace Langham, Jim Lau, and Scott Thompson.

May's subsequent TV credits include guest-starring roles on television shows such as All-American Girl (starring Clyde Kusatsu), Women of the House (starring Teri Garr), and Dark Skies (working with Maury Sterling) and supporting roles in TV movies such as A Walton Wedding (with Roy Brocksmith), The Other Mother (with Gwynyth Walsh), The Tomorrow Man (starring Craig Wasson), and After Jimmy (with Bruce Davison, Tina Lifford, Aaron Lustig, Jeanne Mori, and Natalia Nogulich).

In 2002, May guest-starred as Iris in five episodes of Days of Our Lives. Her co-stars on this series included Vaughn Armstrong and Renée Jones. Her other recent guest spots include episodes of Grounded for Life (starring Richard Riehle), The West Wing (with George Coe, John Cothran, Jr., and Malachi Throne), and Malcolm in the Middle. She also recurred on Neal McDonough's short-lived series, Boomtown.

In addition to her many television credits, May can be seen in a few feature films. Following her appearance in the aforementioned The Lady in Red, she portrayed the mother of the lead character in the 1988 sports comedy Johnny Be Good, which co-starred Seymour Cassel. In 1992, she appeared in the action film Caged Fear along with Paddi Edwards. Most recently, she had roles in Nurse Betty (with TNG guest stars Elizabeth Dennehy and George D. Wallace and Star Trek: Enterprise actor Steven Culp) and Disney's The Kid (also featuring an appearance by Star Trek: Voyager's Jeri Ryan), both released in 2000. 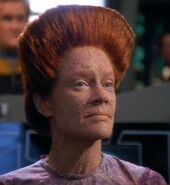 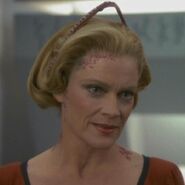 Lyris
VOY: "Favorite Son"
Add an image to this gallery

Retrieved from "https://memory-alpha.fandom.com/wiki/Deborah_May?oldid=2417560"
Community content is available under CC-BY-NC unless otherwise noted.