Holograms used aboard Deep Space 9; organized by program and description.

These holographic Humans were part of the baseball holoprogram in 2375 during the match between the Niners and the Logicians. At request of Captain Sisko they were first removed from the program but later included again when Rom got his chance to play. (DS9: "Take Me Out to the Holosuite")

The audience was played by unknown performers. 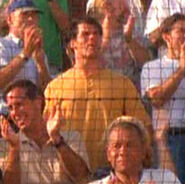 Played by unknown performers
Add an image to this gallery

This holographic Trill was, along with Malko, a character in Jadzia Dax's Hoobishan Baths holoprogram. (DS9: "The Way of the Warrior")

A holographic Tygarian was used by Odo in hopes of curbing a Jem'Hadar's instinct to kill. The Jem'Hadar instinct was not curbed by fighting a holographic opponent. (DS9: "The Abandoned")

This Tygarian fighter was played by stunt actor Tom Morga who received no credit for this role.

These two Starfleet security officers were part of Luther Sloan's holoprogram centering around the loyalty of Julian Bashir. They were armed and guarded Bashir into the holding cell aboard Deep Space 9. (DS9: "Inquisition")

These holographic Klingons were part of Worf's training program for Quark in 2373 when the Ferengi asked Worf for help to impress Grilka. They fought against Quark and Jadzia Dax. (DS9: "Looking for par'Mach in All the Wrong Places") 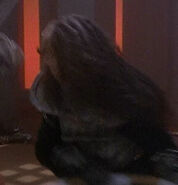 Played by Tom Morga
Add an image to this gallery
Retrieved from "https://memory-alpha.fandom.com/wiki/Deep_Space_9_holograms?oldid=2461957"
Community content is available under CC-BY-NC unless otherwise noted.