Imershein has also appeared in television series such as Dream On (1990), Dallas (1991, with series regular Joshua Harris), Cheers (1993, with Kirstie Alley, Kelsey Grammer, Keene Curtis, and Gordon Clapp), and Silk Stalkings (1998, with Charlie Brill). She was a regular on the drama series Eden (1993, with Barbara Alyn Woods and Robert Curtis Brown).

In 2001 she produced the documentary Scene Smoking: Cigarettes, Cinema & the Myth of Cool which featured René Echevarria. In 2008, Imershein worked as producer on the short film Brushes with Life: Art, Artists and Mental Illness. 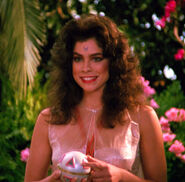 Lieutenant Watley
DS9: "Trials and Tribble-ations"
Add an image to this gallery

Retrieved from "https://memory-alpha.fandom.com/wiki/Deirdre_L._Imershein?oldid=2536887"
Community content is available under CC-BY-NC unless otherwise noted.