Denise Deuschle is an actress who was a regular background performer during the fourth and fifth season of Star Trek: The Next Generation. She received no credit for her appearances and was identified by several call sheets. Deuschle was scheduled to appear in corridor scenes in the fourth season episodes "Night Terrors" and "Half a Life" and in the fifth season episodes "New Ground" and "Conundrum", in bridge and cave scenes in the episode "Silicon Avatar", and in Ten Forward scenes in the episode "The Outcast" but did not appear in the final episodes. 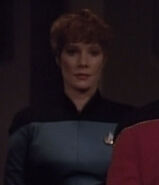 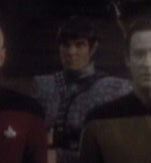 Retrieved from "https://memory-alpha.fandom.com/wiki/Denise_Deuschle?oldid=2415092"
Community content is available under CC-BY-NC unless otherwise noted.