Okuda Award
Okuda's Growing Seed
Denise Okuda (Starfleet)
D. Okuda
Denise Lynn Okuda, affectionately called "Neezee" by friends and close co-workers, living in Los Angeles, California, with her husband, Michael and their dogs, Molly and Tranya, started her official live-action Star Trek affiliation in 1993 as scenic artist on the entire run of Star Trek: Deep Space Nine and Star Trek: Enterprise, as well as on the Star Trek films, Star Trek Generations and Star Trek Nemesis. As computer and video supervisor, she served on the entire run of Star Trek: Voyager. Nevertheless, as fan and under her maiden name Denise Tathwell, she made an early contribution in 1979 when she made an uncredited appearance as an Enterprise crewmember in the recreation deck scenes in Star Trek: The Motion Picture. [1](X) Aside from this, she had Captain D. Tathwell of the USS Ahwahnee named after her under her maiden name, though the reference on the Operation Retrieve mission chart, incidentally created by her husband, was ultimately cut from Star Trek VI: The Undiscovered Country as released.

Once married to Michael Okuda, her career largely mirrored that of her husband, as the couple closely collaborated from then on, most notably the co-authoring of the reference books, Star Trek Chronology, Star Trek Encyclopedia (both directly preceding her tenure on the live-action franchise), and the Star Trek Sticker Book. The Okuda couple was assigned in 2006 to serve as consultants to auction house Christie's, supporting them with the sale of the contents of Paramount's Star Trek warehouses. They helped cataloging the production assets and picking the choice items that were ultimately auctioned off in the highly publicized about 40 Years of Star Trek: The Collection auction of October that year. Husband Mike also wrote the item background annotations for the accompanying two-tome auction catalog. Both Okudas were prominently featured in the documentary Star Trek: Beyond the Final Frontier that was made of the occasion.

She has served together with her husband as producer on the remastered Original Series, which started in 2006. On that occasion, Denise Okuda again made uncredited appearances in two remastered episodes as an additional extra, brought into the newly composited digital scenes. She appeared alongside her husband as a Operations division officer in the 2006 version of "The Menagerie, Part I", and again as such in the 2008 version of "Court Martial". She, again with her husband and now in the role of consultant, subsequently served on the follow-up remastered The Next Generation series project that started in 2012, and as co-producer on the 2016 Star Trek: The Original Series - The Roddenberry Vault release.

In November 2014 Okuda again returned to the Star Trek franchise when she was invited to become a part as consultant of a team of experts – including a host of former Star Trek alumni, including her husband – to oversee a new restoration of the original eleven-foot Enterprise studio model, residing at the Smithsonian Air and Space Museum, for its 50th anniversary. [2] Having accepted the prestigious assignment, Okuda was flown in in May 2015 for the team's first work meeting on 13 May. [3]

Under her maiden name, Denise Tathwell, she has written a short story, "A Battle Won", where, tying in with TNG: "The Battle", Jean-Luc Picard finds something in his trunk from the USS Stargazer that he is able to share with Beverly, and Wesley Crusher. The story was published in the June 1988 issue of the fanzine NCC-1701-D. [4]

On 22 November 2021 it was announced that Denise Okuda, together with her husband, had been awarded the 2022 "Lifetime Achievement Award" from the Art Director's Guild, predominently for their work on Star Trek. [5] In this, they followed in the footsteps of their former co-workers Herman Zimmerman and John Eaves, who had already been bestowed the honor, the latter as recently as the year previously. 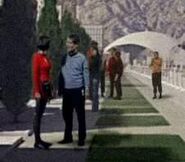 Originally a trained nurse by profession, Denise Tathwell, prior to her marriage to Mike Okuda and her official involvement with Star Trek, has worked in that capacity in a hospital in Orange County, CA., where she met and befriended Debbie Mirek (sharing her middle name), the future collaborator on the Chronology and Encyclopedia. [6]

Denise Okuda started her career in the motion picture industry in 1990, when she worked as computer graphics artist on the pilot episode of the television series, The Flash. During her years on Star Trek, she has, apart from her work for the franchise, also worked as "Computer and Video Supervisor" on the television series Threshold (1995, with her former Star Trek department co-worker Ben Betts), the television movie The Warlord: Battle for the Galaxy (1998, with Star Trek co-workers and family fiends John Eaves and Greg Jein) and the special edition video release Buckaroo Banzai Declassified (The Adventures of Buckaroo Banzai Across the 8th Dimension – with several other Star Trek alumni including Greg Jein again, Mark Stetson, Christopher Lloyd, and Robert Ito, among others) (1984, 2002).

In 2007, Denise and Michael Okuda were hired as video supervisor and scenic designer, respectively, for a planned zombie series co-created by Judith and Garfield Reeves-Stevens entitled Alive. John Billingsley and Gary Graham were set to star on this series, planned to debut in the summer or fall of 2008. However, the series was never made. [7]

In 2019, the Okuda couple joined the Apple TV+ production of the alternate historyseries For All Mankind as graphics and technical consultants, which reunited them with showrunner Ronald D. Moore and his Deep Space Nine and Battlestar Galactica writer/co-producer team Bradley Thompson and David Weddle, alongside Next Generation writer Naren Shankar and intended Star Trek: Phase II star David Gautreaux.