Corvallen freighter captain
Orek
Freebus (deleted scene)
Alien barkeep
Dennis Cockrum (born 22 May 1956; age 65) is an actor who has appeared in episodes of Star Trek: The Next Generation, Star Trek: Voyager and Star Trek: Enterprise. He also provided several voices for the game Star Trek: Bridge Commander, including those for Captains Robert DeSoto and Gregory MacCray, as well as Commander Jonathan Willis. His jacket from his first appearance in "Face of the Enemy" was sold off on the It's A Wrap! sale and auction on eBay [1] as was his costume from his deleted appearance in "Two Days and Two Nights". [2] Cockrum filmed his scenes for "Two Days and Two Nights" on Friday 22 March 2002 on Paramount Stage 8 and is listed as "Risan Representative" on the call sheet. This scene, numbered scene 2, was cut but later included in the ENT Season 1 DVD 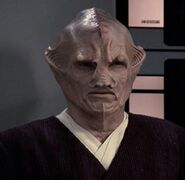 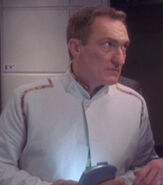 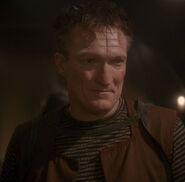 Alien Barkeep
ENT: "The Communicator"
Add an image to this gallery

Retrieved from "https://memory-alpha.fandom.com/wiki/Dennis_Cockrum?oldid=2753503"
Community content is available under CC-BY-NC unless otherwise noted.