Dentistry was the study and professional care of a person's teeth. A dentist was a person who practiced dentistry. This person received a medical degree upon completion of their study.

Most Starfleet medical personnel were trained in numerous fields, including dentistry. But there was also a dedicated sub-division of Starfleet Medical, Starfleet Dental, responsible for the field.

Hygienists worked in the field of dentistry by providing teeth cleanings for patients who where under the care of a dentist. (DS9: "Paradise Lost")

In the 19th century on Earth, Doc Holliday was the local doctor and dentist of Tombstone, Arizona. (TOS: "Spectre of the Gun")

One branch of dentistry was orthodontics, the application of "braces" on a person's teeth to realign them. In the 20th century, Maury Ginsberg was a very successful orthodontist in Scarsdale, New York. (VOY: "Death Wish")

In 1986, time-traveler Dr. Leonard McCoy was sarcastically accused of holding a degree in dentistry by a surgeon preparing to operate on an injured Pavel Chekov at Mercy Hospital. (Star Trek IV: The Voyage Home)

Doctor Phlox had many degrees in alien medicine, among them was a degree in dentistry. (ENT: "Dear Doctor", "A Night in Sickbay")

On Vulcan, a common dental practice was for a Vulcan to have their teeth coated in a trifluorinate compound to prevent cavities. Despite having this done in 2128, T'Pol had a cavity in one of her anterior tricuspids that Dr. Phlox had to restore in 2151. (ENT: "Dear Doctor")

Hoshi Sato used a sonic toothbrush to clean her teeth. (ENT: "The Catwalk")

The inhabitants of planet 892-IV utilized a dental hygiene product known as Mars Toothpaste in 2268. (TOS: "Bread and Circuses")

In the Ferengi and Klingon cultures, teeth were sharpened with a tooth sharpener. (DS9: "Little Green Men")

Missing teeth could be replaced by removable substitutes. In 2375, imagining growing old with Benjamin Sisko by her side, Kasidy Yates joked about imagining him on Bajor "sitting in your rocking chair, watching the sunset over the mountains every night, wondering where you put your teeth", to which Sisko replied, "Just like my great-great grandfather, in the glass next to the chair" (DS9: "Penumbra")

In 2376, when Harry Kim asked Tom Paris if the holographic character Maggie O'Halloran had a sister, Paris warned him that the woman had wooden teeth. Kim suggested that an adjustment to the holomatrix would solve that problem, but Paris liked the Fair Haven holoprogram just the way it was. (VOY: "Fair Haven") 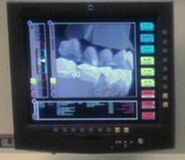 In the novel, Chain of Attack, a Dr. Rajanih (β) was the doctor in charge of dentistry on board the USS Enterprise.

Concept art for the USS Enterprise-D had a dental ward adjacent to sickbay.