ISBN 9781508237952
ASIN B0744PLCFF (Audible)
Desperate Hours is a Gallery DIS novel – the first novel in the series – written by David Mack. Published by Gallery Books, it was first released in trade paperback in September 2017, in conjunction with the first season of Star Trek: Discovery.

From the book jacket
Aboard the Starship Shenzhou, Lieutenant Michael Burnham, a human woman raised and educated among Vulcans, is promoted to acting first officer. But if she wants to keep the job, she must prove to Captain Philippa Georgiou that she deserves to have it.

She gets her chance when the Shenzhou must protect a Federation colony that is under attack by an ancient alien vessel that has surfaced from the deepest fathoms of the planet's dark, uncharted sea.

As the menace from this mysterious vessel grows stronger, Starfleet declares the colony expendable in the name of halting the threat. To save thousands of innocent lives, Burnham must infiltrate the alien ship. But to do so she needs to face the truth of her troubled past, and seek the aid of a man she has tried to avoid her entire life – until now. 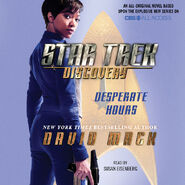 Canon characters listed below are linked to the main article about them. Non-canon characters are not linked, but those that recurred, appearing or being mentioned in more than one story, are defined further in Gallery DIS characters.