List of individuals who visited the bar on Dessica II.

Several alien species were observed at the bar on Dessica II, when the crew of the USS Enterprise-D visited in 2370, including Andorans, Boslics, Corvallens, Nausicaans, and Tygarians. (TNG: "Gambit, Part I")

This alien worked as a bartender in a bar on Dessica II in 2370. He was from a species characterized by several vertical ridges running from the tip of the nose to the forehead, one wide nostril and small spikey protrusions on the lower part of the face and the backs of the hands.

Captain Jean-Luc Picard was abducted by mercenaries at his bar. Deanna Troi asked him for information about Picard. She told the bartender that she had business dealings with Picard and that he owed her money. She did not tell him that Picard was a Starfleet officer. He was taken by her look and asked her to come back to discuss it after the bar closed. When she said no, he said he knew nothing about the man she was looking for. Troi told him he was lying, and he said that he knew she was Betazoid. He told her that his customers wished to remain anonymous, and if he talked too much he would be out of business. William T. Riker and Worf were questioning another patron by the name of Yranac as to what happened to Picard. Just as Yranac was about to talk to them for a price, the bartender grabbed him and told him that he had too much to drink and should keep quiet. Beverly Crusher aimed a phaser at him and told him to leave Yranac alone. (TNG: "Gambit, Part I")

The alien bartender was played by Stephen Lee.
According to the script he was described as "
a large, intimidating male alien."

These three humanoids were patrons in a bar on Dessica II in 2370 while Commander Riker, Worf, Dr. Crusher, and Deanna Troi were on an undercover mission to find their captain, Jean-Luc Picard. (TNG: "Gambit, Part I") 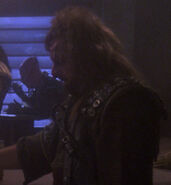 Played by an unknown actor
Add an image to this gallery
Retrieved from "https://memory-alpha.fandom.com/wiki/Dessica_II_visitors?oldid=2398609"
Community content is available under CC-BY-NC unless otherwise noted.