Katherine Pulaski; Ann Mulhall; Miranda Jones
Diana Muldaur (born 19 August 1938; age 83) was the actress best known to Star Trek fans for her portrayal of Chief Medical Officer Katherine Pulaski during the second season of Star Trek: The Next Generation. She appeared in all but two episodes of the season: "The Outrageous Okona" and "Q Who".

Muldaur had previously appeared in two episodes of Star Trek: The Original Series ("Return to Tomorrow" and "Is There in Truth No Beauty?"), playing two different characters who also held the title of "Doctor." Muldaur filmed her scenes for "Return to Tomorrow" between Monday 20 November 1967 and Tuesday 28 November 1967 at Desilu Stage 9 and Stage 10, and her scenes for "Is There in Truth No Beauty?" between Tuesday 16 July 1968 and Wednesday 24 July 1968 at Stage 9 and Stage 8.

In 1988, Muldaur was cast as Dr. Pulaski for the second season of TNG as a replacement for Gates McFadden, the actress who played Beverly Crusher in the first season. McFadden had some sort of falling out with the show's producers, especially Maurice Hurley, and left (or was asked to leave) the show, and Muldaur was brought on board. However, following the end of the second season, the issues with McFadden were resolved and she returned to the series. Muldaur's last appearance as Dr. Pulaski was "Shades of Gray", the final episode of the second season. On 20 September 1988 Muldaur was interviewed and these interviews were later published on the TNG Season 2 DVD in the special features "Mission Overview Year Two" ("Diana Muldaur", "Gene Roddenberry") and "Selected Crew Analysis Year Two". In these interviews Muldaur told that she had moved into the high desert Sierra Nevada with her husband in 1988 when she got a call to work on The Next Generation and couldn't resist.

Among the props and costumes auctioned off on the It's A Wrap! sale and auction on eBay were a face mold and her costume from the episode "Unnatural Selection". [1] [2]

Muldaur began her television career with a recurring role on the soap opera The Secret Storm in 1965, on which John Colicos also starred. She followed this with a recurring role as Jeannie Orloff on the medical drama Dr. Kildare, guest-starring in five episodes along with her future TOS co-star William Shatner as well as fellow TOS guest star Bruce Hyde. In 1969, she became a regular on the short-lived series The Survivors, which lasted only 15 episodes. Following this series' end, however, Muldaur was cast in the role of Chris Coughlin in the crime drama McCloud, which lasted seven seasons from 1970 through 1977. Fellow TOS guest performer Ken Lynch was also a regular performer on this series; the two of them had previously co-starred together in a 1968 episode of The Outcasts called "A Ride to Vengeance", along with Erik Holland.

In 1976, she and TNG guest star David Ogden Stiers participated in the pilot episode of the hit action series Charlie's Angels. That same year, Muldaur became a regular on The Tony Randall Show, which lasted for two seasons from 1976 through 1978. Her other TV credits throughout the 1970s include: the Police Woman episode "Solitaire" (1977) along with TNG & Star Trek: Deep Space Nine director Corey Allen and guest performers Richard Lynch and Eugene Roche; the 1977 TV movie The Deadly Triangle, in which she played the wife of Robert Lansing's character; an episode of The Hardy Boys/Nancy Drew Mysteries, starring Phillip Richard Allen and William Schallert; the 1978 mini-series Black Beauty, with John de Lancie and Brock Peters; and another 1978 mini-series, The Word, co-starring Star Trek: Voyager's Kate Mulgrew as well as Jonathan Banks, Christopher Lloyd and Nehemiah Persoff.

Muldaur's prolific career spans not only television, but films as well. One of Muldaur's earlist film appearances was in 1969's Number One, co-starring fellow TOS guest star Roy Jenson. She then co-starred with Barry Newman in the 1970 movie The Lawyer, which became the 1974-76 NBC series Petrocelli. She was unavailable for the series, and was replaced by Susan Howard. In 1971, Muldaur co-starred with another TOS guest actress, France Nuyen, in the Western film One More Train to Rob. In 1974, she co-starred with John Wayne in one of the latter's final films, McQ. That same year, she starred in movies, Chosen Survivors with Barbara Babcock and "Planet Earth".

In 1980, Muldaur made her first of three appearances as Dr. Janet Carlyle on the medical drama Quincy, a series which featured Robert Ito and Garry Walberg as regulars. The following year, Muldaur co-starred with Harry Mudd actor Roger C. Carmel in the short-lived adventure series Fitz and Bones. She also co-starred with Carmel in the Fitz and Bones TV movie Terror at Alcatraz in 1982 (which also featured appearances by Elisha Cook, Marc Lawrence, Michael Pataki, and Georgia Schmidt).

More recently, Muldaur lent her voice to the character of Dr. Leslie Thompkins on Batman: The Animated Series. Those she worked with on this series include Adrienne Barbeau, Joseph Campanella, Paul Williams, Robert Costanzo, and John de Lancie.

Muldaur is a former board member of the Screen Actors Guild. She also served a tenure as president of the Academy of Television Arts and Sciences. Having retired from acting in 1993, Muldaur is currently active as a dog-breeder and a judge at dog shows. 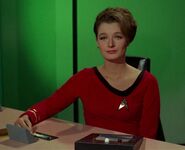 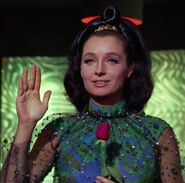 Miranda Jones
TOS: "Is There in Truth No Beauty?"