Richard DeHart "Dick" Crockett (27 February 1915 – 25 January 1979; age 63) was a stunt coordinator and stuntman on who worked on Star Trek: The Original Series. He was William Shatner's stunt double in the second pilot "Where No Man Has Gone Before".

Among his other television guest appearances was a 1966 episode of The Man From U.N.C.L.E. ("The Off-Broadway Affair"). He was a frequent collaborator with director Blake Edwards, with their shared credits including Breakfast at Tiffany's (1961, with Stanley Adams), Days of Wine and Roses (1962, with Jennifer Edwards and Ken Lynch, and camera operation by Jerry Finnerman) The Pink Panther (1963, with wardrobe supervision by William Ware Theiss and camera operation by Richard H. Kline), The Great Race (1965, with Chuck Hicks, Clegg Hoyt and Roy Jenson, and stunts by Robert Herron, Carey Loftin and Ronald R. Rondell) The Party (1968), Return of the Pink Panther (1975, with Christopher Plummer), The Pink Panther Strikes Again (1976, with Deep Roy), and Revenge of the Pink Panther (1978).

Crockett's last movie job was as stunt coordinator for the movie 10. He died during production – the film is dedicated to him. 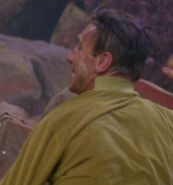 Stunt double for
William Shatner
TOS: "Where No Man Has Gone Before"
(uncredited) 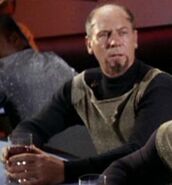 Andorian thrall
TOS: "The Gamesters of Triskelion"
Add an image to this gallery

Retrieved from "https://memory-alpha.fandom.com/wiki/Dick_Crockett?oldid=2698646"
Community content is available under CC-BY-NC unless otherwise noted.