Richard "Dick" Dial (16 June 1931 – 17 January 1992; age 60) was a stuntman and stunt actor who appeared in several Star Trek: The Original Series episodes and in one episode of Star Trek: The Next Generation.

Dial filmed his scenes for "Arena" between Wednesday 9 November 1966 and Friday 11 November 1966 on location at Vasquez Rocks Natural Area Park and the nearby fortress set. He filmed his scenes for "The Apple" on Monday 17 July 1967 and Tuesday 18 July 1967 at Desilu Stage 10, his scene for "And the Children Shall Lead" on Monday 1 July 1968 at Stage 9, and his scene for "For the World is Hollow and I Have Touched the Sky" on Wednesday 14 August 1968 at Stage 10.

Dial appeared in the mob-movie Murderer's Row (1966) with frequent TNG guest actor Nick Dimitri. Up next was the 1967 spy movie fare, In Like Flint where Dial was teamed with Yvonne Craig, Steve Ihnat and James B. Sikking. On television, Dial kept a more active pace. On Voyage to the Bottom of the Sea, Dial worked with Gene Dynarski in "The Buccaneer". On The Man From U.N.C.L.E. episode, "The Minus-X Affair", Dial shared screen time with Paul Winfield. Dial was on The Time Tunnel in "Invasion" which also featured Whit Bissell and James Darren. Dial got work on The Green Hornet in "Bad Bet on a 459-Silent" with Nicholas Coster and Jason Wingreen. Dial was seen next on the crime drama Mannix in "Then the Drink Takes the Man" with TNG guest star John Anderson. Dial was also present on The Mod Squad starring Tige Andrews and Clarence Williams III in "Keep the Faith, Baby" with William Schallert. On the police series Felony Squad, Dial played Eel in "Nightmare on a Dead-End Street" with Robert DoQui and Vince Howard and again in "Blind Terror" with DoQui. Dial's front of screen career ended with work on Mission Impossible in "Live Bait" with Anthony Zerbe and another time in the episode "Hunted" with Leonard Nimoy. 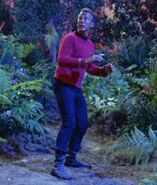 Security guard
TOS: "And the Children Shall Lead"
(uncredited)

Fabrini guard
TOS: "For the World is Hollow and I Have Touched the Sky"
(uncredited) 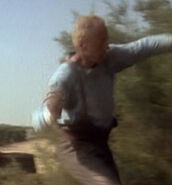