The Doberman, or Doberman Pinscher, was a breed of domesticated dog, originating from Germany, on Earth.

While searching for a vacant automobile to "borrow", during a time travel visit to Earth in 2004, Jonathan Archer had a startling encounter with a barking Doberman that was locked in one of the cars he attempted to access. (ENT: "Carpenter Street")

This dog's breed wasn't scripted; in the final draft script of "Carpenter Street", it was referred to simply as "a vicious-looking dog" which barked "loudly".

The image of an angry and barking Doberman was among multiple disturbing thoughts that Tuvok imposed upon the Mari Guill during a mind meld in 2374. (VOY: "Random Thoughts") 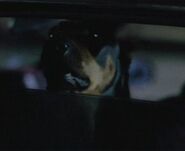 An angry Doberman in a parked car 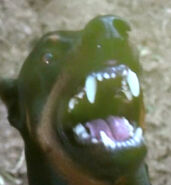 Retrieved from "https://memory-alpha.fandom.com/wiki/Doberman?oldid=2270658"
Community content is available under CC-BY-NC unless otherwise noted.