born in Leicester, England, he attended the private Uppingham School.

He went to University College London and earned a degree in history, with honors. But he kept hoping for an acting career, and participated in several University productions, ultimately becoming a professional actor.

He made television commercials during the late 1980s, most notably for Vidal Sassoon. His English pronunciation of the word "salon" in these commercials was ultimately parodied in a skit on NBC's Saturday Night Live.

Keating was a regular cast member on the popular British sitcom Desmond's from 1989 through 1993. After leaving Desmond's, Keating became a regular on Teenage Health Freak for its second season.

While still on Desmond's, Keating appeared in three episodes of the long-running police procedural series The Bill. He also made a guest appearance in a 1989 episode of the British crime drama The Paradise Club with Greg Ellis. In 1992, he appeared in an episode of the detective series Inspector Morse entitled "Dead on Time."

Keating made an uncredited appearance in the 1994 US made-for-TV movie Shake, Rattle and Rock! Fellow Star Trek alumni Gerrit Graham, Dick Miller, William Schallert, and Dey Young also had roles in this movie.

In 1997, Keating made his feature film debut in the Disney comedy Jungle 2 Jungle. Star Trek: The Next Generation guest actor David Ogden Stiers (Timicin) co-starred in this film.

Keating was among several Trek actors who appeared in the 1999 independent film The Auteur Theory. Others who appeared in this film include Star Trek: Deep Space Nine star Armin Shimerman (Quark), Star Trek: Voyager star Garrett Wang (Harry Kim), and Paula Malcomson. The latter would go on to appear in ENT: "Silent Enemy", portraying Madeline Reed – the sister to Keating's Malcolm Reed.

Another independent film in which Keating appeared was 2001's The Hollywood Sign. Star Trek Generations actress Jacqueline Kim (Demora Sulu) co-starred in this film, and Whoopi Goldberg (Guinan) also made an appearance.

Keating made guest appearances on a handful of American TV series before joining the cast of Enterprise, including Poltergeist: The Legacy, and UPN's G vs E and Special Unit 2. He also appeared in an episode of Buffy the Vampire Slayer as a member of the Watchers Council (Jeff Kober and Harris Yulin guest-starred in the episode, as well).

According to his interview in the special features of the Season 2 DVD of Enterprise, Keating auditioned for a guest role in Star Trek: Voyager at some point during that series' run. Although the audition was unsuccessful, Keating made a sufficiently good impression on producers Rick Berman and Brannon Braga that they invited him to audition for Enterprise.

After the end of Enterprise, Keating appeared in an episode of Las Vegas directed by David Straiton, who directed ten episodes of Enterprise. TNG guest actress Nikki Cox was a regular on Las Vegas.

Keating later starred in the horror movie Hollywood Kills, in which he played a sadistic Hollywood producer who tortures potential movie stars. Also, Keating and his "Rajiin" co-star Nikita Ager participated in the Jonathan Winters documentary Certifiably Jonathan. In addition, Keating played the villain in the direct-to-video sci-fi thriller Species: The Awakening, co-starring Ben Cross. He also reunited with his Enterprise co-star Jeffrey Combs for a short film called The Attackmen.

Besides these projects, Keating had a role in the feature film adaptation of the poem Beowulf. Directed by Robert Zemeckis, this film utilized the same 3-D motion capture technique as 2004's The Polar Express (also directed by Zemeckis), in which the physical performances of the actors are recorded digitally and then animated. Keating played the role of the slave Cain.

Keating made brief appearances as an Irish crook named Will on NBC's hit series Heroes. Besides series regulars Zachary Quinto and Cristine Rose, TOS stars George Takei and Nichelle Nichols also appeared on this series. Keating next had a recurring role on the Fox series Prison Break as Andrew Tyge [1], and was seen in the UK series Holby City. He recently completed shooting on a film entitled The Ninong (aka Foreign Policy), in which he plays the main villain (and title character). He also appeared in the CSI: NY episode "Uncertainty Rules."

He also had a role in a commercial for Sprint, in which he played a flamboyant Hollywood executive about shooting a movie. The advertisement was shown with new releases of films in order to keep the phones turned off during the movie.

Most recently he appeared in the B-movie "mockbuster" Sherlock Holmes (2010), Asylum Entertainment's rip-off from Guy Ritchie's blockbuster movie with the same title.

He had just finished acting the character Luthor in Sons of Anarchy Season 3. As a member of a now short charter he could possibly be seen in Season 4.

In 2012, he voiced the character of Kormac the Templar in the video game Diablo III by Blizzard Entertainment.

Keating revealed in Star Trek Magazine issue 138 that he auditioned for the role of James T. Kirk's midwestern uncle in 2009's Star Trek. He did not get the part, however. [2] Keating later stated that the role he auditioned for was Kirk's "evil stepfather," suggesting that Kirk's uncle became his stepfather (and not a particularly good one). The role ultimately went to Brad William Henke and was later overdubbed by Greg Grunberg. [3] 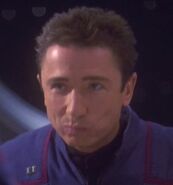 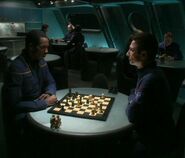 Organian (in the body of Malcolm Reed)
(ENT: "Observer Effect") 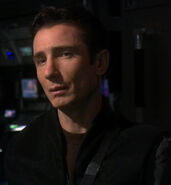 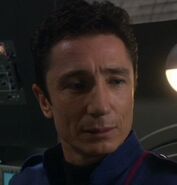 Malcolm Reed (hologram)
(ENT: "These Are the Voyages...")