View source
watch 01:40
Boba Fett Returns - The Loop
Do you like this video?
Play Sound
"If you travel far enough you will eventually meet yourself."
– Jean-Luc Picard, 2365 ("Time Squared")

Doppelgänger was a word from the German language which meant an exact duplicate of a living person. The term doppelganger has been used throughout history, most often when someone met an identical copy of themselves who was not a biological twin. Miles O'Brien, Harry Kim, Naomi Wildman, and Kes were replaced by doppelgängers of their respective "originals" after they died. (DS9: "Visionary", VOY: "Deadlock", "Fury") 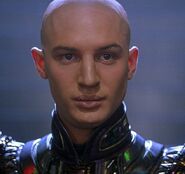 Because the split between signals resulted in an equal distribution of Riker's transporter pattern, both of them had an equally legitimate claim to being the "real" William T. Riker, however it can be argued that "Thomas" is the real Riker as the transporter chief aboard the Potemkin used a second beam signal to retrieve the current person known as William T. Riker while the original beam signal rematerialized on the planet surface. 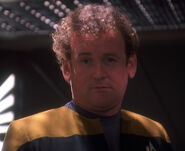 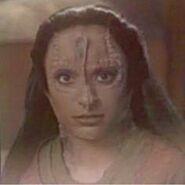 Garth of Izar
masquerading as Spock 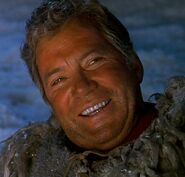 Female Changeling
in the form of Kira
(DS9: "Heart of Stone")

Changeling in the form of Admiral Leyton
(DS9: "Homefront")

Changeling in the form of O'Brien
(DS9: "Paradise Lost") 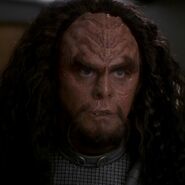 Martok in the form of General Martok
(DS9: "The Way of the Warrior", "Apocalypse Rising") 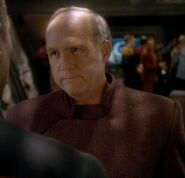 Krajensky in the form of Ambassador Krajensky
(DS9: "The Adversary")

Changeling in the form of Bashir
(DS9: "The Adversary")

Changeling in the form of Odo
(DS9: "The Adversary")

Julian Bashir in the form of Bashir
(DS9: "Rapture", "The Darkness and the Light", "The Begotten", "In Purgatory's Shadow", "By Inferno's Light") 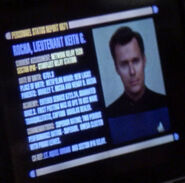 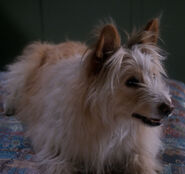 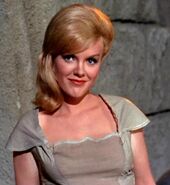 ...then as a girl from Wrigley's pleasure planet

...then as Crewman Green

...then as Leonard McCoy

A Vendorian
masquerading as Leonard McCoy