Private S. Money
Parsons
Private N. Myers
Dorenda Moore (born 12 March) is a stuntwoman, stunt actress, and stunt coordinator who portrayed three MACO in several episodes of Star Trek: Enterprise. Moore received no credit for her appearances. Her costume as S. Money was sold off on the It's A Wrap! sale and auction on eBay. [1] More recently, she served as stunt double for Winona Ryder in J.J. Abrams' Star Trek. [2]

In 2010 Moore received an Emmy Award for Outstanding Stunt Coordination for her work on the action series Kamen Rider: Dragon Knight at the 37th Daytime Emmy Awards. Moore is the first stunt coordinator who received this award. Among the nominees was fellow Star Trek stunt performer Michael Cassidy for his work on the soap The Bold and the Beautiful. [3] 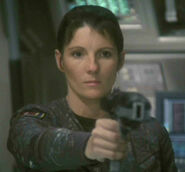