Memory Alpha
Register
Don't have an account?
Sign In
Advertisement
in: DIS performers, Performers, After Trek guests,
and 4 more
English

Saru; Saru (mirror)
Doug Jones (born 24 May 1960; age 62) is an American actor who portrays Commander Saru, the Kelpien Starfleet science officer, in Star Trek: Discovery. Jones was announced as joining the cast of Discovery on 26 November 2016. [1]

Jones has been acting since the mid-1980s but was not prolific until he was cast in 1990's Night Angel, with Sam Hennings. In 1992, Jones appeared in director Tim Burton's Batman Returns joining Anthony De Longis, Branscombe Richmond, Diane Salinger, and Vincent Schiavelli. The next project for Jones was 1993's direct to video Magic Kid, with Joseph Campanella. Next that year was the Halloween-themed Hocus Pocus, with Michael McGrady and Charles Rocket. Jones received further notice in the dystopian Tank Girl (1995) alongside Reg E. Cathey, Jeff Kober, Clayton Landey, Malcolm McDowell, Lori Petty (who portrayed the title character), and Frank Welker.

Typically cast as creatures in science fiction and fantasy projects, Jones is best known for his collaborations with Mexican filmmaker Guillermo del Toro, who cast him as Abe Sapien in Hellboy (2004) and Hellboy II: The Golden Army (2008), opposite Ron Perlman as the title character. He also played the Faun and the Pale Man in del Toro's Pan's Labyrinth (2006), and the Silver Surfer in the 2007 Marvel Comics film Fantastic Four: Rise of the Silver Surfer. He played two demonic Imps in the 2005 movie adaptation of Doom, which also starred Karl Urban and Dwayne Johnson.

On television, Jones appeared as various alien creatures in The Outer Limits revival series (1995-2002), which was narrated by Kevin Conway. He co-starred with Robert Picardo in one of those appearances, and was cast by Mary Jo Slater in all episodes.

For his role as Saru, Jones was nominated three times for a Saturn Award for Best Supporting Actor on a Television Series, [2] winning the second one in 2019 and the third one in 2021. 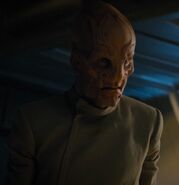 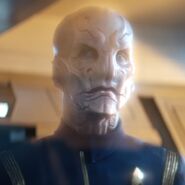