Douglas Tait (born 17 December 1978; age 41) is an actor, stuntman, and creature performer who appeared as a Gaia colonist in the Star Trek: Deep Space Nine fifth season episode "Children of Time". He also portrayed the character of the long faced alien, who sat between Nyota Uhura and James T. Kirk when they first met in the Shipyard Bar, in 2009's Star Trek. [1] [2] His alien character was nicknamed "Brian" by the production team and make-up artists to distinguish his character from the other aliens during the production. Tait was the second choice for playing this part after the first candidate Derek Mears was unable because of the time schedule. Tait's make-up was applied by David Dupuis and Richard Alonzo and he shot his scenes at the American Legion Post in Hollywood. [3] The virtual collectible card battle game Star Trek: Rivals has him listed as "Alien Barfly Brian" on card #5, using a behind the scenes shot of Tait.

Hailing from Tarzana, California, Tait trained as an actor under Star Trek: The Original Series guest star Kim Darby. He is the grandson of legendary composer Reggie Montgomery and the brother of actor Matthew Tait. Since 8 March 2003 he has been married to actress Isabel Cueva.

Doug Tait co-starred with his wife in the films Short Fuse (2005), North by El Norte (2007), and Carts (2007, with the legendary actor Warren Stevens who appeared in TOS in 1968, playing the role of Rojan). Carts won the Best Feature Film Award at the Valley Film Festival in September 2007.

In addition to DS9, Tait has appeared on such television shows as 7th Heaven (starring Stephen Collins and Catherine Hicks), Sabrina, the Teenage Witch, Mad TV, Drake & Josh, and Jericho (on which he also worked as a stuntman). His film credits as both an actor and stunt performer include Purple Heart (2005, starring William Sadler and Ed Lauter) and Zathura: A Space Adventure (2005), which was directed by Jon Favreau.

Tait played the role of the hockey mask-wearing serial killer Jason Vorhees in the ending scenes of the 2003 horror film Freddy vs. Jason. He also performed stunts in Paramount Pictures' release Indiana Jones and the Kingdom of the Crystal Skull. More recently, he played a Sleestak in the film Land of the Lost, the score of which, like Star Trek, was composed by Michael Giacchino. Douglas stars in two horror films which are currently in post production, The Hunchback and One By One: Deaths Door, which also stars Tony Todd. He will also be playing a demon character in the upcoming film Knights Of Badassdom. 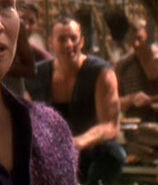 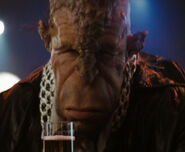 Tellarite
PIC: "Remembrance"
Add an image to this gallery

Retrieved from "https://memory-alpha.fandom.com/wiki/Douglas_Tait?oldid=2451664"
Community content is available under CC-BY-NC unless otherwise noted.