ISBN 9781508253037
ASIN B07875T7GL (Audible)
Drastic Measures is a Gallery DIS novel – the second novel in the series – written by Dayton Ward. Published by Gallery Books, it was released in trade paperback in February 2018.

From the book jacket
It is 2246, ten years prior to the Battle at the Binary Stars, and an aggressive contagion is ravaging the food supplies of the remote Federation colony Tarsus IV and the eight thousand people who call it home. Distress signals have been sent, but any meaningful assistance is weeks away. Lieutenant Commander Gabriel Lorca and a small team assigned to a Starfleet monitoring outpost are caught up in the escalating crisis, and bear witness as the colony's governor, Adrian Kodos, employs an unimaginable solution in order to prevent mass starvation.

While awaiting transfer to her next assignment, Commander Philippa Georgiou is tasked with leading to Tarsus IV a small, hastily assembled group of first responders. It's hoped this advance party can help stabilize the situation until more aid arrives, but Georgiou and her team discover that they're too late – Governor Kodos has already implemented his heinous strategy for extending the colony's besieged food stores and safeguarding the community’s long-term survival.

In the midst of their rescue mission, Georgiou and Lorca must now hunt for the architect of this horrific tragedy and the man whom history will one day brand "Kodos the Executioner"…

The Tarsus IV colony is struck by a virulent fungal infection that poisons the food supplies. The settlement has worked toward complete self-sufficiency for decades and is populated by many who want autonomy from the Federation. However, the nearby Epsilon Sorona II colony recently faced their own natural catastrophe, forcing the relocation and integration of those six thousand colonists into the two thousand already on Tarsus. While most on Tarsus grudgingly welcome the immigrants, they were angered by not being consulted about the relocation by the Federation. Tensions rise as crops transplanted from Epsilon Sorona have mutated to cause the fungus and famine. Starfleet musters emergency aid out of Starbase 11, but the first responders are not expected to arrive for weeks. Amidst the chaos, the ruling council loses confidence in Governor Gisela Ribiero and installs Adrian Kodos, an obscure scientist with crisis management experience, in her place. Though Kodos' decisiveness is initially a source of hope, his directives quickly turn dangerous. He orders civilian security to raid the planet's small Starfleet monitoring base, killing two of its five officers and stealing its stockpile of weaponry. Soon after, he orders the entire colony to attend a public address in the amphitheater. The population is divided into two groups for separate rallies, ostensibly due to the building’s capacity, but in truth, Kodos sorted the population based on their continuing importance to the colony. Using the stolen Starfleet phaser cannons and other artillery, those members of civilian security loyal to Kodos carry out the mass executions of the first group of four thousand colonists. This is Kodos' solution to the emergency: sacrificing half of the population in the hopes of saving those whom he deems worthy.

The surviving members of the Starfleet outpost – Lt. Commander Gabriel Lorca (senior officer), Lt. Aasal Soltani, and Ensign Terry Bridges – lay low and prepare to make problems for Kodos. Lorca is singularly focused, mourning the deaths of two of his crew as well as colonist Balayna Ferasini, with whom he had a serious relationship. They break through Kodos' communications blackout and warn the incoming relief vessel, the USS Narbonne. Aboard the ship, Commander Phillipa Georgiou and Lt. Enamori Jenn hurriedly organize the first responders. The Narbonne is able to arrive weeks ahead of schedule, spurring Kodos to purge himself from all colony computer records and to flee with some of his loyalists into the mountains, which are full of sensor-inhibiting minerals.

Under the leadership of Georgiou, the Narbonne's Captain Aurobindo Korrapati, and the reinstalled Governor Ribiero, relief forces begin to restore order to the colony, feeding the population with emergency rations and combating the fungal plague. However, there are riots by scared and angry colonists and active sabotage by Kodos loyalists still within the city. Lorca leads the manhunt for Kodos and his sympathizers, made more difficult by the computer purge and the fact that very few people can actually identify the man. He makes several arrests, including Alexander Simmons. Simmons leads Lorca's team into the mountains on foot. Georgiou meets several young people: Samantha Moulton, whose father was among the executed, Thomas Leighton, who lost both parents and was horribly scarred fleeing from security at the amphitheater, and young Jim Kirk, who broke into the private computer of a Kodos associate and discovered a personal photo of the man, finally putting a face to the name. Coordinated attacks on the power plant and throughout the city are designed to conceal the loyalists' theft of a transport vessel. With the Narbonne's systems upset by the power surge, Georgiou risks beaming aboard the stolen ship and is able to grant a Starfleet engineer with remote control. In the struggle, the flight controls are damaged, but Georgiou is able to put the ship down in a crash-landing with no loss of life.

Lorca's search party faces lethal booby traps and an attack by loyalists, though they are able to defeat their attackers. One of them leads Lorca to the hidden encampment but exposes Lorca before being killed by his own men. Lorca and his team storm the cave, also outfit with booby traps that Kodos activates to hide his escape. A cave-in traps Lorca with Kodos and a few aides, but the fugitives die when their stockpiled munitions explode in the firefight, their bodies burned beyond recognition. A genetic scan suggests that one of the corpses is Kodos, though this is only because Kodos swapped his profile with that of his aide, Ian Galloway. Kodos himself escapes into the wilderness, hides out for a few months, and later flees the planet using his stolen identity. Other starships arrive to help with relief efforts and Georgiou and Lorca are sent to Starbase 11 for debriefing. Some colonists choose to leave as well, though many remain to rebuild their lives. Lorca remains bitter and disillusioned about Federation idealism in the wake of the disaster. Ten years later, Samantha Moulton conducts a thorough study of the disaster, interviewing many of the survivors and even the perpetrators. She publishes a book, The Four Thousand: Crisis on Tarsus IV, in the hopes that history not repeat itself.

In 2019, Drastic Measures was nominated for and won a Scribe Award in the "Original Novel — Speculative" category. [1] 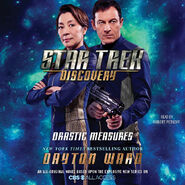