A dummy or mannequin was a life-sized model of a Human used for various purposes.

In 2266, James T. Kirk referred to a particular puppet, which he initially believed to be Balok, as "a dummy. A puppet of some kind." (TOS: "The Corbomite Maneuver")

In 2267, Hikaru Sulu compared a Black Knight that had just slain Leonard McCoy to a dummy. (TOS: "Shore Leave")

In the final draft script of "Shore Leave", the Black Knight's face was described thus; "The smooth flawless face of a wax dummy… not a cheap one, but rather like a Mme. Tussaud's face, too good an imitation to be anything but an imitation."

In 2366, while subduing a hologram of William T. Riker, Reginald Barclay referred to the officer as "a pretty mannequin in a fancy uniform." (TNG: "Hollow Pursuits")

Also that year, when shown male android Data by Kivas Fajo, Palor Toff mistook him for a mannequin. (TNG: "The Most Toys")

In 2373, The Doctor referred to other holograms of famous people as "Automatons, mannequin simulacra." (VOY: "Darkling")

In a stage direction from the final draft script of TOS: "Miri", the interior of Biggs' toy store was said to include "some kid-sized mannequins, dressed as surfers and surferettes."

Aside from the Balok puppet, at least two mannequins appeared in Star Trek: The Original Series, with one appearing as a Psi 2000 crew woman in "The Naked Time" and as the midform during the creation of android Kirk in "What Are Little Girls Made Of?". One also appeared, made to appear like makeup artist Edward French, as the frozen Klingon prisoner in Star Trek VI: The Undiscovered Country. 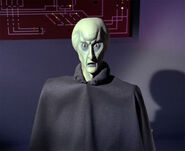 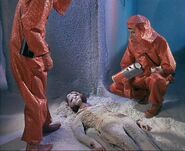 A frozen Klingon prisoner
Add an image to this gallery

Retrieved from "https://memory-alpha.fandom.com/wiki/Dummy?oldid=2376674"
Community content is available under CC-BY-NC unless otherwise noted.