Personnel serving aboard the Duras sisters' Bird-of-Prey in 2371.

These bridge officers served aboard Lursa and B'Etor's Klingon Bird-of-Prey in 2371.

They were not too impressed with Tolian Soran and called him a petaQ when the El-Aurian returned to the bridge after torturing Geordi La Forge. They exclaimed "Qapla" when Lursa and B'Etor had managed to get hold of the USS Enterprise-D's shield frequency, but were killed when the Bird-of-Prey was destroyed by the Galaxy-class ship a short while later. (Star Trek Generations) 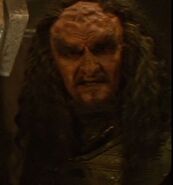 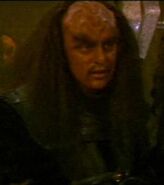 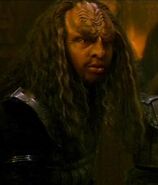 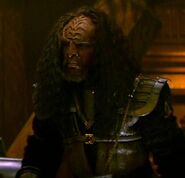 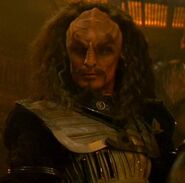 played by an unknown actor
Add an image to this gallery

This guard served aboard Lursa and B'Etor's Klingon Bird-of-Prey in 2371. He was killed when the Bird-of-Prey was destroyed by the USS Enterprise-D. (Star Trek Generations)

This guard was played by Rif Hutton; he was credited as "Klingon Guard".
His speaking role appeared in the theater release of the film, but was subsequently cut from the video release of the film. In this ultimately deleted scene, he was responsible for asking Soran "
What shall I do with this?" regarding the unconscious Geordi La Forge.
The Star Trek Customizable Card Game gives his name as Dokar.

In 2371, this helm officer was serving on the D12-class Klingon Bird-of-Prey commanded by Lursa and B'Etor. He was killed, along with the rest of the crew, when the vessel was destroyed by the Enterprise-D. (Star Trek Generations)

The helm officer was played by actor Brian Thompson; he was credited as "Klingon Helm", but also referred to in the script as the navigator.
Thompson previously portrayed the unrelated Klingon Lt. Klag in TNG: "A Matter Of Honor".
Retrieved from "https://memory-alpha.fandom.com/wiki/Duras_sisters%27_Bird-of-Prey_personnel?oldid=2561957"
Community content is available under CC-BY-NC unless otherwise noted.