The following is a list of ECS Fortunate personnel.

The freighter had a crew complement of twenty-three and a Teneebian skunk. (ENT: "Fortunate Son")

This crewman contacted Captain Keene over com and informed him about the Nausicaan attack on the Fortunate. He was then ordered by Keene to drop out of warp and charge the plasma cannon. (ENT: "Fortunate Son")

This male crewman was voiced by an unknown actor.

These four crew members served aboard the Fortunate in 2151. The first two accompanied Matthew Ryan and Shaw through the access corridor to welcome the away team from Enterprise NX-01 on board. The other two were roaming the corridors before they worked on the bridge when the Fortunate followed a Nausicaan ship and discovered the Nausicaan cargo station inside of an asteroid. (ENT: "Fortunate Son") 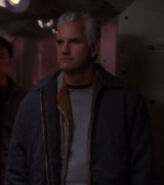 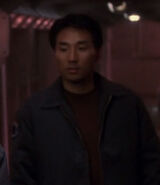 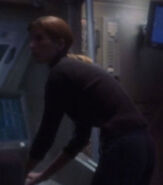 Played by Derek Coleman
Add an image to this gallery

This boy was playing hide and seek with the other children on the Fortunate. T'Pol found one of the children hiding behind an access panel. When the boy asked T'Pol if she had seen Nadine, she replied no, as she did not know that the girl she had seen was named Nadine. (ENT: "Fortunate Son")

The boy was played by actor Daniel Asa Henson who filmed his scene on Thursday 27 September 2001 on Paramount Stage 18.

All three actors/stuntmen filmed their scenes on Friday 28 September 2001 on Paramount Stage 18. 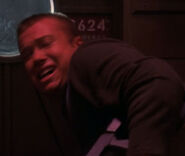 Played by Mickey Cassidy
Add an image to this gallery

A second boy was playing hide and seek while T'Pol was on board the Fortunate. He was with the first boy trying to find Nadine. (ENT: "Fortunate Son")

This boy was played by background actor Donovan Dickens who received no credit for this appearance. He filmed his scene on Thursday 27 September 2001 on Paramount Stage 18.

This kid had a Teneebian skunk as a pet as recalled by Matthew Ryan. (ENT: "Fortunate Son")

When Malcolm Reed asked Matthew Ryan why they sent a distress call when they didn't need any help aboard the Fortunate, Ryan told him that one of their younger crewmembers panicked and hit the emergency beacon. Because of the offline communications system they weren't able to tell Starfleet to ignore it. (ENT: "Fortunate Son")

This character was only mentioned in dialogue.
Retrieved from "https://memory-alpha.fandom.com/wiki/ECS_Fortunate_personnel?oldid=2530406"
Community content is available under CC-BY-NC unless otherwise noted.