eFX Collectibles, also known as EFX, Inc., is an American company founded in 2007 and based in Los Angeles, California. It produces licensed prop replicas from a number of entertainment franchises.

In 2009, eFX acquired licensing to produce high quality Star Trek collectible replicas from the various television series and films, not including the 2009 Star Trek film which had been licensed by QMx. eFX's licensing had been previously held by Master Replicas which had merged with Corgi.

In late 2009, eFX began shipping an upgraded version of Master Replicas' Mark IX science tricorder from Star Trek: First Contact, along with a display case and belt holster. Each tricorder came with a plaque signed by Brent Spiner and was limited to 684 numbered pieces. These high quality tricorder replicas featured working LEDs, sound effects, and a metal exterior.

eFX planned to release an assortment of other tricorder models and showed a number of phase-pistol, laser pistol, phaser, and communicator replica prototypes. These products did not reach production.

eFX announced tentative plans for the production of Star Trek replica starships in late 2009. The company planned to produce a twenty-eight inch studio scale Klingon Vor'cha-class battle cruiser and planned a series of "Precision Cast" starship replicas measuring from ten to twelve inches long. The first "Precision Cast" release was slated to be the USS Enterprise but none of the planned starship replicas were released nor were any prototypes previewed to the public.

In 2012, all Star Trek branding was removed from the eFX website and there was no franchise-related merchandise shown at their San Diego Comic-Con booth. No further Trek products have since been released by the company. 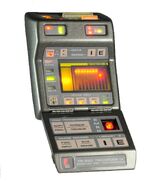 Retrieved from "https://memory-alpha.fandom.com/wiki/EFX_Collectibles?oldid=2532329"
Community content is available under CC-BY-NC unless otherwise noted.