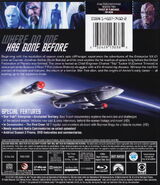 In 2005 five Enterprise episode podcasts/audio commentaries were recorded for download at the original StarTrek.com, the official Star Trek website. While three of them found their way on later released home media formats, be it DVD, Blu ray disc or both, the one recorded for "Judgment" – featuring Writer David A. Goodman and then StarTrek.com Managing Editor Tim Gaskill – was not among them. At the time, it was released too late for inclusion on the pursuant DVD release, whereas the radical restructuring of the site in 2007 has conceivably caused the recording to become lost. However, the recording is saved for posterity at TrekCore. [3]