An earpiece was a wireless receiver device used by communications officers, science officers and navigators during the 22nd and 23rd centuries. (ENT: "Broken Bow"; TOS: "The Corbomite Maneuver", et al.)

In the 22nd century, a Starfleet earpiece was usually a white, round module with a blue center, adjacent to six oblong holes. The user of the earpiece would press it against their right or left ear, enabling them to hear the device. This style of earpiece was commonly used by Communications Officer Hoshi Sato aboard the NX-class starship Enterprise. (ENT: "Broken Bow", "Civilization", "Fortunate Son", et al.)

Earpieces were used by officers on the bridge of the USS Kelvin, which doubled as communicators. A variant lacking the communicator end was worn by the ship's tactical officer. (Star Trek)

By the mid-2260s, earpieces were more commonly used aboard Starfleet vessels. They consisted of several metallic rungs, attached to a virtually transparent lead that was inserted into the user's ear, negating the need for tactile support. The signals they received could be amplified throughout the user's ship, although the devices had no automatic protection that might mute or lower loud transmissions. Aboard the Constitution-class Enterprise, this style of earpiece was frequently used by Communications Officer Uhura, Science Officer Spock, and several relief navigators. (TOS: "The Corbomite Maneuver", et al.) The same type of earpiece was also aboard the USS Defiant when the ship went missing from 2268 of the prime universe. After the vessel arrived in 2155 of the mirror universe and was seized by the Terran Empire, the earpiece was briefly used by Hoshi Sato at the communications station on the Defiant's bridge; she used it when arranging visual contact with the ISS Avenger. (ENT: "In a Mirror, Darkly, Part II") 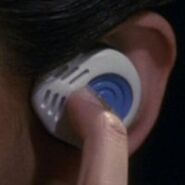 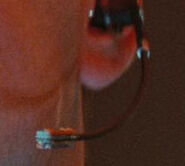 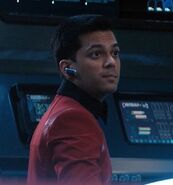 From 2259 in the alternate reality

The earpiece was first used aboard the prototype starship Enterprise NX-01 in April 2151. While the starship was being attacked by two Suliban cell ships in the atmosphere of a gas giant and hid in a layer of liquid phosphorus that disabled the ship's sensors, Hoshi Sato managed to use her earpiece, pressed against her left ear, to learn that a Suliban projectile weapon was about to collide with Enterprise before it actually did. Using the information determined via her earpiece, Sato was able to alert the other officers on the bridge to brace themselves before the collision. She later used the device to help locate Captain Archer and Commander Tucker, who were aboard a Suliban helix in a lower layer of the atmosphere. (ENT: "Broken Bow")

On two separate occasions later in the same year, Sato listened to her earpiece while attempting to contact both an Axanar craft and a group of Human colonists who had settled on the planet Terra Nova. She received no response on either occasion, however. (ENT: "Fight or Flight", "Terra Nova")

Sato used her earpiece again to listen to all the different Akaali languages and thus identified the name of the species – Akaali. (ENT: "Civilization")

In 2266, Uhura, who had been assigned to serve as the Enterprise's communications officer, used an earpiece in her left ear to determine that the starship was not receiving any signals from an odd cube encountered in uncharted space.

After the Enterprise destroyed the cube, Spock wore an earpiece (replacing his earphone) in his right ear while he reported to Captain Kirk that there was no sign of the cube, and considered possible consequences if the starship continued on its course.

While later wearing her earpiece, Uhura hailed an object approaching the Enterprise that was actually a ship under the command of Balok, who had meant the cube to be a warning buoy. Shortly after she contacted Balok's ship, relaying a message from Captain Kirk, navigator Dave Bailey put another earpiece to his right ear. He used the device to receive a message transmitted over his navigation beam. Uhura, still wearing her own earpiece, was able to play Balok's message aloud so that the other officers aboard could also hear what was being sent. Both Bailey and Uhura continued to hear the message through their earpieces but, when a piercing crackle of static was transmitted from Balok's ship, the two officers immediately pulled the devices from their ears, in pain due to the disturbingly loud noise.

Uhura continued to use her earpiece as she relayed messages from Captain Kirk to Balok, often removing it at her own accord. However, she twice removed the device from near her ear when, both times, the bridge began to resonate with a whining noise that steadily increased in pitch. She also later used the earpiece to detect a repeating distress signal from Balok - while he was in a smaller personal ship that had apparently lost power - to the craft he had departed, the Fesarius. (TOS: "The Corbomite Maneuver")

While the Enterprise pursued an unidentified vessel actually belonging to Harry Mudd, Uhura used her earpiece to ascertain that the occupants of the craft were either refusing to answer her hails or not receiving them. After the vessel entered an asteroid belt and began to superheat, Uhura heard a distress signal from the craft through her earpiece, but Harry Mudd and three female companions of his were rescued and beamed aboard the Enterprise shortly thereafter. Uhura later used her earpiece to arrange a meeting between the Enterprise's senior staff and two miners from Rigel XII, as the starship required replacement lithium crystals. While officers from the ship reluctantly arranged a trade in which they would receive the crystals if they provided the miners with Mudd's companions, one of the women and a pursuing miner became lost in a magnetic storm on the planet. As part of the subsequent search, Uhura used her earpiece to maintain communications with the miners, until the storm worsened and audio contact was consequently broken. Both the miner and the woman were ultimately recovered, although Uhura's earpiece was not responsible for locating them. (TOS: "Mudd's Women")

The name of this device was never stated in any episode and comes from the scripts of Star Trek VI: The Undiscovered Country [1] and ENT: "Broken Bow" [2]. The Star Trek Encyclopedia and the Star Fleet Technical Manual call it an "ear receiver", while some TOS novels use the term "Feinberg receiver", an in-joke reference to Irving A. Feinberg. In the second revised draft script of "The Corbomite Maneuver" and the final draft script of "The Naked Time", the device was called an "earphone". In the script of "Dagger of the Mind", it was called an "earpiece device." In the script of "Arena", it was referred to as a "little ear plug."

The audio device used by Spock in "Where No Man Has Gone Before" was described in that episode's script first merely as a "listening device" and later, when Spock is finished using it, as an "earphone". [3] Despite its appearance somewhat differing from the earpieces seen in subsequent episodes and TOS films, the earphone used by Spock has much the same purpose as an earpiece.

Even in her first appearance as Uhura, as the camera pulls back from an elevated position above the bridge in "The Corbomite Maneuver", actress Nichelle Nichols is seen with an earpiece in her ear. Later in the same episode, Spock wears an earpiece that features in a continuity error, as it suddenly disappears in the next shot.

The earpiece was required to be remade by props master Gregory Jein for Star Trek VI: The Undiscovered Country. "It was all machined aluminum," commented Jein. The prop was mostly the same as one built for Star Trek V: The Final Frontier, though the props department tried to improve on that model by giving the new earpiece the ability to light up when Uhura pressed a particular button. As the additional electronics made the prop too heavy for Nichelle Nichols to wear in her ear, however, the battery was removed from inside the prop, making it lighter while also obviously removing its intended light-up function. (The Making of the Trek Films, 3rd ed., p. 127)

Sato's earpiece was scripted to make an appearance in ENT: "The Forgotten". However, the device doesn't actually appear in that episode.

When an earpiece was required for the alternate reality Uhura of the 2009 film Star Trek, some preliminary artwork – illustrating at least nine different styles – was sketched. J.J. Abrams wanted to use the same earpiece that Nichelle Nichols (as Uhura) wore in the original Star Trek series. However, a replica of that prop that props master Russell Bobbitt obtained did not fit actress Zoë Saldana. Bobbitt ultimately manufactured seven different sizes before the perfect fit was achieved. (Star Trek - The Art of the Film, p. 108)

The number of times "Uhura touches earpiece" was one of numerous tracked "Trek Stats" featured in the interactive Star Trek 2.0.