Despite an uneasy peace treaty that had lasted for several years, the warlike powers of the Klingon Empire had secretly longed for the means of smashing their sworn enemies in the Space Federation. Now, at last, their ruthless leaders were ready for a supreme act of treachery...

Prepared for a dramatic encounter, a Klingon Strike Raider intercepts the starship Enterprise, provoking Captain James T. Kirk with hit-and-run weapons fire. Kirk, incensed by the Klingons' audacity, orders return fire, while a few officers remark that the Klingons are attempting to start another war. Kirk orders a pursuit course, taking the Klingons' bait. Uhura deduces that they are heading for Seggor, an uninhabited planet that the Klingons may be using as a base. The Raider arrives almost a half hour ahead, and lands in a hidden underground hangar.

The Enterprise sends down a shuttlecraft, and the landing party spread out. Observing everything from their secret lab below, the Klingons abduct crewman Hoskins. One of the other men report back to Kirk that he has disappeared, and Kirk suggests there may be a hidden underground complex, explaining where the Raider and Hoskins had gone. Down below, the Klingons continue to observe, unimpressed with Kirk. Having completed their plans for Hoskins, they lift him on a platform, strapped into restraints, and doors in the ceiling open to reveal him to his fellow officers. Relieved but wary, Kirk slowly walks over to Hoskins and touches him, only for Hoskins to crumble to dust.

Clearly disturbed, Kirk orders the rest of the landing party to return to the Enterprise to prevent further casualties, though Sulu stays behind with the captain. Kirk decides to scoop up Hoskins' dust for Spock to analyze, but a group of armed Klingon warriors appear. Kirk and Sulu put up a valiant struggle, but are soon overcome by sheer numbers. The Klingon commander orders Hoskins' dust collected, and Kirk and Sulu are taken underground. The Klingons fire their "granulator" at the dust, and Hoskins re-materializes. The commander reveals that the Klingons have the ability to destroy and create matter at will, and gives Kirk the ultimatum to return to Earth and surrender or be destroyed.

Providing another demonstration, the commander directs attention to Kirk's shuttle, on the surface, protected by a force field. Snapping his fingers, a gun-like apparatus springs to the surface, and tears the shuttle into a pile of smoldering powder. Aghast at the Klingons' destructive power, the commander sends him back to the Enterprise via transporter, warning him against any tricks. Bitter and dejected, Kirk calls an immediate conference of all senior officers. Crestfallen, Kirk refuses suggestions, announcing that they are powerless and must do as they are told. Scotty protests that there must be something, but Kirk snaps back that there is nothing and orders an immediate course set for home.

Walking through the corridors with Doctor McCoy, Scott questions Kirk's thinking. Knowing how devious the Klingons can be, he suggests that the captain could have been hypnotized. McCoy says that Sulu also saw the same demonstrations of power, and Scott refuses to listen. Inspired by the fortitude of his ancestors, Scott beams down to Seggor, ignoring McCoy's protests. The Doctor immediately informs Kirk, who is further upset, reasoning that they all have only moments to live, explaining that the granulator's rage is limitless and there is nowhere the Enterprise can move to for safety. On Seggor, Scott manages to find a way into the hidden base, and knocks out several Klingons. He sees those of high rank watching the Enterprise on their scanners, musing that Kirk must be planning something. They hail the ship, nudging it to move along or face destruction.

Sick at heart over having to abandon Scott, Kirk reasons that whatever happens to Scott is his own fault, and engages the ship on its course to Earth. Scott makes his way to the large granulator, and rewires its circuitry. Finishing his task, Scott makes his way back to the surface, fighting off the Klingons who have regained consciousness. He is found out by another Klingon while escaping and hails the Enterprise for an emergency beam-out. The Klingon commander orders the Enterprise's destruction just as Scott is rescued, and the underground complex explodes, taking with it a dozen square miles of the planet's surface.

Back on the Enterprise, Scott says that he jammed the doors so that the weapon fired back on itself. Kirk says that he was going to have Scott court martialed, but has changed his mind. Scott says that, this time, he will accept his captain's decision.

"These Klingons never give up in trying to provoke the Federation into another war!"
"Aw, the skipper will lodge a complaint, and it'll get buried in red tape as usual!"

"For Pete's sake, Scott! You can't afford to be so emotional!"

"There they go! On their way to tell the universe that the Klingons are the masters!"
"You know, I would have expected Kirk to try something. He has quite a reputation, that man!"

None of the UK weekly stories had titles. Each installment was two pages in length. The last two pages of this story were published in black and white, a first for the weekly UK story arcs. 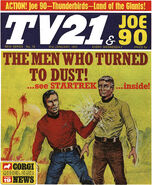 TV21 & Joe 90 #19: "THE MEN WHO TURNED TO DUST!" – Hoskins becomes a victim of the Klingon granulator
Add an image to this gallery

Retrieved from "https://memory-alpha.fandom.com/wiki/Eleventh_UK_Story_Arc?oldid=2426491"
Community content is available under CC-BY-NC unless otherwise noted.