Holographic patron;
Command officer
Elizabeth Carlisle is an actress who was a regular background performer on Star Trek: Voyager where she appeared as a command officer. As a background actress she received no credit for her appearances.

Beside her work on Star Trek, Carlisle also appeared in the crime thriller Lust for Freedom (1987), the romance Blind Ambition (2008), the television pilot Neighborhood Watch at the Hollywood (2009), and the horror film Evil Acts (2015). 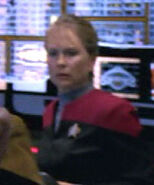 Retrieved from "https://memory-alpha.fandom.com/wiki/Elizabeth_Carlisle?oldid=2702409"
Community content is available under CC-BY-NC unless otherwise noted.