Elle Alexander (born 22 October) is a stuntwoman, stunt actress, and stunt coordinator who performed stunts in eight episodes of Star Trek: Deep Space Nine and Star Trek: Voyager. For most of her appearances she received no credit.

Several costumes worn by Alexander in Star Trek were sold off on the It's A Wrap! sale and auction on eBay, including the costumes from the episodes "Imperfection" [1] and "The Dogs of War", [2] which was a re-used dress from actress Tricia O'Neil in her role as Korinas, "Favorite Son", [3] and "Blood Fever". [4] The two latter costumes list her name as Ellen Alexander. The call sheet for the episode "The Dogs of War" listed her under her maiden name Ellen Itkoff.

Alexander was born in California. She has doubled for stars such as Natasha Henstridge, Kristen Johnston, Courtney Love, Tracy Needham, Diane Salinger, Claudia Schiffer, and Missi Pyle, and has started her career as Danger, a female wrestler, in the wrestling series WOW: Women of Wrestling. For this series she also served as stunt coordinator and appeared alongside several Star Trek performers such as Nikki Flux, Katie Rowe, and Rosine "Ace" Hatem. She was also a regular stunt performer on the television series She Spies (2002-2004, alongside Spice Williams-Crosby, Brian Avery, Mark Chadwick, Lisa Hoyle, Gail Monian, Lin Oeding, Nicole Randall, Justin Sundquist, and Todd Bryant).

Other television series Alexander has performed in include Silk Stalkings, The Bold and the Beautiful, One World (2000, episode Crushed, with Michelle Krusiec and Randy Hall), Crossing Jordan (2003, with regular cast member Miguel Ferrer and Alicia Coppola), Buffy the Vampire Slayer, Pacific Blue, JAG (2003, with Richard McGonagle and Barry Wiggins, and coordinated by Diamond Farnsworth), Heroes (2007, with Zachary Quinto and stunts by Ian Quinn and Justin Sundquist), David E. Kelley's The Wedding Bells (2007), and several episodes of Zoey 101 (2005-2007) and Passions (2003-2004).

Alexander's film roles include supporting roles in the academy award nominated Donnie Brasco (1997) and Gloria (1999), the burning mother superior in the horror film The Convent (2000, with Adrienne Barbeau and fellow stuntwomen Dorenda Moore and Rosine "Ace" Hatem), Michelle Strigo in the acclaimed crime thriller Confidence (2003, with Leland Orser, Robert Pine, and stunts by Chuck Borden and Dyanna Lynn), and stunt performances in Enemy of the State (1998, with Dan Butler and Kane Hodder), Man on the Moon (1999, with Vincent Schiavelli, Tracey Walter, Christopher Lloyd, and stunts by Jennifer Caputo, Gene LeBell, Rosine "Ace" Hatem, J. Suzanne Rampe, Lynn Salvatori, and Spice Williams-Crosby), The Flintstones in Viva Rock Vegas (2000, with Joan Collins), Jeepers Creepers and Jeepers Creepers 2 (2001 and 2003, starring Gina Philips in the previous one and Ray Wise in the latter one), and Bringing Down the House (2003) where she doubled Missi Pyle in the legendary cat fight.

Alexander has also appeared in and coordinated several music videos for artists such as the Goo Goo Dolls ("Black Balloon" and "Dizzy"), Bon Jovi ("One Wild Night"), and Hole ("Celebrity Skin"), performed in many television commercials such as the Imandi commercial as a wrestling maid against fellow stuntwoman Rosine "Ace" Hatem, and has coordinated and performed in the operas Carmen, Tosca, and Don Giovanni.

In 2007 she made guest appearances in Numb3ers (with Christopher Lloyd and Wil Wheaton), Chocolate News (2008, with Rico E. Anderson, Willie Garson, and Kevin Derr), and My Name is Earl (with stunts by Erica Grace). Other projects include the action comedy Superhero! (2008), alongside Star Trek performers Christopher McDonald, Brent Spiner, Michael Ensign, and stunt performers Chris Antonucci, Rick Avery, and Gregory J. Barnett and the comedy Miss Nobody (2008), with Richard Riehle and Patrick Fischler) in which she doubled actresses Missi Pyle and Leslie Bibb.

The following years she performed stunts in episodes of iCarly (2009) and The Cleaner (2009), portrayed the Zombie meter maid in the horror comedy Zombieland (2009, with stunts by Derek Graf, Michelle Sebek, Victor Paguia, Kimberly Shannon Murphy, and Johnny Martin) and doubled actress Sigourney Weaver in the comedy You Again (2010, with Victor Garber).

More recently Alexander performed stunts as Lena the leader of the underworld in the science fiction film San Francisco 2177 (2010, with Michael Rose, Michael Duisenberg, and fellow stuntwoman Boni Yanagisawa) and doubled again Sigourney Weaver in the science fiction comedy Paul (2011, with Simon Pegg, John Carroll Lynch, and stunts by Bobby Burns) and in the comedy Vamps (2011, with Wallace Shawn, Malcolm McDowell, Scott Thomson, and Marty Murray). She also worked as stunt double for Lisa Wyatt on an episode of The Suite Life on Deck (2011, with Kim Rhodes and Brenda Strong), as stunt double for Louise Fletcher in three episodes of Shameless (2012, with Ed Lauter and Diora Baird), as stunt double for Melanie Camp on True Blood (2012, with Peter Mensah, Henry Kingi, Jr., and Mark Aaron Wagner), appeared as Molly in an episode of the Nickelodeon series Bucket & Skinner's Epic Adventures (2011), performed on stage as Mazeppa in the Los Angeles musical "Gypsy", and worked as stunt coordinator on the comedy Ex-Free (2012, with Mark Rolston and Cheryl Lewis). 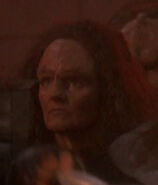 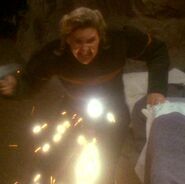 Ajilon Prime guard
DS9: "Nor the Battle to the Strong" 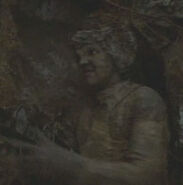 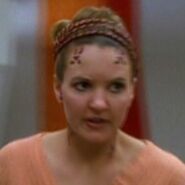 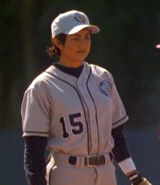 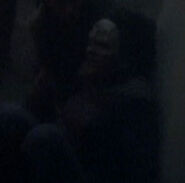 Retrieved from "https://memory-alpha.fandom.com/wiki/Elle_Alexander?oldid=2417738"
Community content is available under CC-BY-NC unless otherwise noted.