Durant is skilled in dance, sports, and stunts, worked as fitness trainer, and opened an extras casting service in 2003. He studied at the American Academy of Dramatic Arts in Los Angeles and at the High School of Performing Arts in New York. Beside several commercials and stage plays he also played Batman in the national tour "Batman Beyond" for DC Comics.

Among his feature films are the comedy Hollywood High Part 2 (1981), the comedy The Nutty Professor (1996, with Athena Massey and Julianne Christie), the vampire comic adaptation Blade (1998, with Judson Scott and Sidney Liufau), the fantasy comedy Mystery Men (1999, with Sunny Gorg), and the drama Undercover Angel (1999). 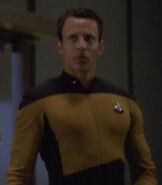 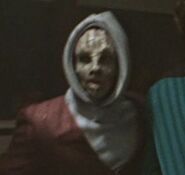 Bajoran officer
DS9: "Shadows and Symbols"
(uncredited)
Add an image to this gallery

Retrieved from "https://memory-alpha.fandom.com/wiki/Elliot_Durant_III?oldid=2525965"
Community content is available under CC-BY-NC unless otherwise noted.