From the book jacket
It's been over twenty-five years since the original Star Trek television series debuted on network television – and today, the universe first seen in that show is more popular than ever. Star Trek VI: The Undiscovered Country was a huge box-office hit, and Star Trek: The Next Generation is now entering its sixth incredible season as the most popular hour of syndicated entertainment on television.

Now comes Deep Space Nine, a thrilling new addition to the Star Trek universe. Commanded by an embittered Starfleet officer and populated by a myriad of exotic aliens, the mysterious space station known as Deep Space Nine hovers on the edge of a wormhole, a doorway that leads to the galaxy's farthest reaches – and beyond…

Commander Benjamin Sisko is just recovering from the death of his wife when he is assigned command over the former Cardassian, but new Federation space station, Deep Space 9. This space station is strategically located not only because of its orbit about Bajor, but also because of its proximity to the only known stable wormhole in the galaxy. After meeting the other Bajoran and Starfleet personnel assigned to the station, including a former Bajoran freedom fighter and a shapeshifter, Sisko finds himself in that very wormhole and in the midst of a metaphysical experience as the alien inhabitants of the wormhole question the concepts of time and love. Sisko, filled with humanistic hubris, begins to explain these experiences, and resolve his painful past. 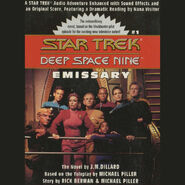 Benjamin Sisko
Starfleet commander, the CO of Deep Space 9. In 2367, then a lieutenant commander, Sisko had been among the survivors of the USS Saratoga at the Battle of Wolf 359. Subsequently, Sisko attempted to be assigned to Earth, but the closest he came was the Utopia Planitia shipyards on Mars, where he served for almost three years. A week before his posting to DS9, he halfheartedly applied for an astrionics professorship at Vasteras University. Sisko recalled failing an unannounced emergency drill because of an attack of nervousness during his first year at Starfleet Academy.
Kira Nerys
Bajoran Militia major, liaison and XO of DS9.
Odo
Deep Space 9's security chief.

This novel claims Odo was found in the Denorios belt in 2319 and treated by the Bajorans "as one of their own" (p. 57). However, Dax later informs Sisko of an unknown vessel being found with a shapeshifter inside in the year 2337 (p. 136). At the time this novel was written, Odo's origin was still very much a mystery.

Julian Bashir
DS9's CMO. Bashir is noted as being a specialist in multi-species medicine.
Jadzia Dax
DS9's science officer. Jadzia mentions to Sisko that Dax met Kai Taluno at a peace conference while serving as a diplomatic apprentice.

Since Taluno lived during the 22nd century, it was probably Lela Dax who met Taluno.

O'Brien is repeatedly identified as an ensign, but this is clearly contradicted by his remark in "Past Tense, Part I", "That's why I never became an officer."

Jas-qal
Nog's accomplice, a member of an alien race called B'kaazi, in looting mineral samples from the Promenade during its reconstruction.

In the episode, the looter accomplice was a Markalian.

Suarez
The watch officer on the bridge of the Enterprise-D when Chief O'Brien was ready to disembark permanently to his new assignment aboard Deep Space 9.
Lamerson
Jake's schoolteacher at Utopia Planitia.
Taluno
Kai, described by Dax as a "rather dour, dogmatic man" not prone to exaggeration.
Jhakka
A Promenade vendor who attempted to apprehend Jake Sisko after Nog stole food from another vendor.
Drak
A Ferengi pit boss at Quark's Bar.

The character credited as "Ferengi pit boss" in the episode was later revealed to be Rom, the father of Nog and brother of Quark.

Jasad
Gul.
Majut
Jasad's second-in-command. He informed his commander of Deep Space 9's armaments, which were actually false duranium shadows.
Other USS Rutledge personnel present during the Setlik III massacre
Rendell
Lind
Garcia
Maria Huxley
The wife of Rutledge captain Benjamin Maxwell. She lived on Setlik III with their children only to be killed during a Cardassian raid.
Ty Cobb
Born Tyrus Raymond Cobb, he was considered to be one of the greatest baseball players of all time. Cobb was manifested by the Prophets during Sisko's encounter in the wormhole.

USS Saratoga personnel at the Battle of Wolf 359:

Denorios belt
This area of space is constantly referred to as the Denorios Asteroid Belt in the novel, which contradicts Dax's statement of it being a charged plasma field in the episode.
Bajoran sand dragon
This animal was likened to a Terran crocodile.
Garis Five
A planet Dax visited where light is an art medium. The Bajoran Orb reminded Jadzia of the art there.
Vasteras University
An educational institution located on Earth. Sisko ultimately turned down an invitation to teach there to remain on Deep Space 9.

The location of the university was not provided in the novel, but there is a university located in the city of Västerås in Sweden.

Chrondrite echo
A sensor echo caused by a meteor rich in water and organic material. Chief O'Brien warned Jadzia Dax that the high proton counts encountered in the Denorios belt could just be a collection of chrondrite echoes.

Chondrites are an existing type of meteorite.

Astrionics
The development and application of electronic systems and components for spacecraft. Benjamin Sisko is offered a position as professor of astrionics at Vasteras University.
Hadas IV
A desolate planet marked by violent thunderstorms.
Szagy Park
The park where Benjamin Sisko proposed to Jennifer.
Droli
A Bajoran baked good similar to a Terran biscuit. It is seasoned with herbs and has a distinct aroma.
Class six starship
O'Brien considered a starship of this size to be the only means of transporting the station to the mouth of the wormhole until Dax suggested an alternate method.