George Takei with Leonard Nimoy as the voice of Spock

Enterprise: The First Adventure is a Pocket TOS novel written by Vonda N. McIntyre. Published by Pocket Books, it was first released in September 1986, and outlines the first mission undertaken by James T. Kirk as Captain of the USS Enterprise.

From the book jacket
James T. Kirk is the youngest man to be promoted to the rank of captain in Federation history. His crew consists of a first officer who finds him impetuous; a chief engineer who finds him arrogant; a chief medical officer who finds him trifling; and a helmsman who wants a transfer.
But the young crew, which would later become the legendary space explorers, quickly puts aside their differences when a monstrous starship appears on their nascent flight path.

"…and I know that Captain Kirk will find the Enterprise and its crew as faithful as I did."

"No, he treats me like I'm fifteen. That's when he met me. He treats you like you're eight."

"I believe that what Ms. Lukarian is trying to tell you is that you are a doctor, not a magician." 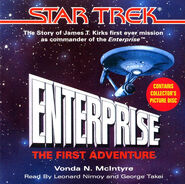 Philip Boyce
CMO of Starbase 32.
Hunter
Captain of the Aerfen.