Epiphany is a Pocket TOS novel – the third and final novel in the Vulcan's Soul trilogy – written by Josepha Sherman & Susan Shwartz. Published by Pocket Books, it was first released in hardback in April 2007.

From the book jacket
Following their bestsellers Vulcan's Forge and Vulcan's Heart, Josepha Sherman and Susan Shwartz conclude their new trilogy chronicling the latter-day adventures of one of Star Trek's most beloved characters, shedding new light on his world's shocking history.

The distant past: The great ships have left war-torn Vulcan behind and, after a most arduous journey, have arrived at their destination. Two worlds become the new home of the exiles: Romulus is a verdant paradise, one much different from their desert home, while Remus is a barren wasteland, albeit one that is laden with natural resources. When Karatek and his family find themselves trapped on Remus with no hope of joining their brothers and sisters on Romulus, it sparks a conflict that leads the exiles into vicious civil war.

One year after the Dominion War: The Watraii are determined to destroy the Romulan Star Empire. Ambassador Spock is equally determined to learn their secret. With the aid of his wife Captain Saavik and the USS Alliance, his old comrades Scotty, Uhura, and Chekov, and Captain Jean-Luc Picard and the USS Enterprise, Spock executes a daring plan to bring about peace before the Alpha Quadrant is once again plunged into war…

The stunning conclusion to the trilogy that changes everything you thought you knew about the Vulcans and the Romulans! 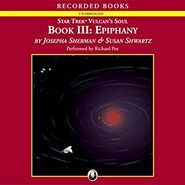 Retrieved from "https://memory-alpha.fandom.com/wiki/Epiphany?oldid=2452108"
Community content is available under CC-BY-NC unless otherwise noted.