Eric Hunter is an actor who worked as background actor in several episodes of Star Trek: Voyager.

He portrayed one of the pub patrons in "Fair Haven". Later he appeared as one of the two alien guards in the episode "Tsunkatse" and a command division officer. As a background actor he received no credit for his appearances and was identified by the name tags of his costumes which were sold off on the It's A Wrap! sale and auction on eBay. The previous costume was previously worn by background actor John Austin in the episodes "Year of Hell" and "Year of Hell, Part II". [1] [2] 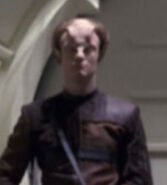