Eric Scott Norris (born 20 May 1965; age 56) is a stuntman, stunt actor, and racing driver who performed stunts in three Star Trek films and two episodes of Star Trek: Enterprise. He received no credit for his television work. His costume from the ENT third season episode "Damage" was sold off on the It's A Wrap! sale and auction on eBay and previously worn by a background actor on the Star Trek: Voyager second season episode "Alliances" and by Bob Rudd in the seventh season episode "Nightingale". [1]

Norris was born in Redondo Beach, California and is the youngest son of actor and martial arts expert Chuck Norris, the brother of actor and stuntman Mike Norris, is married to Stephanie Norris and has three children with her.

In 1982 his father introduced him in the car races and from this time he has become a famous NASCAR race driver who formed his own team with "Norris Racing". He has won several prices and championships. Norris is also working as a director and stunt coordinator. 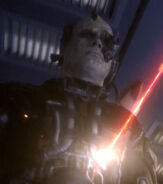